In 1883, Major Sargood, an officer in the Victorian Colonial Forces, explained to fellow officers and several press representatives features of Morris tubes at a meeting at the old Government Printing office in Melbourne. He was one of a number of officers, drawn from several Australian colonies, who had talked to military authorities ‘of the highest standing’ in London who were advocates for the use of rifles modified with Morris tubes.1 Sargood pointed out that the steel Morris tubes could be let into the barrels of normal government rifles, like the Snider or the Martini Henri. In doing this the size of the bore was reduced thereby converting them into what were called ‘saloon rifles’. These saloon rifles, he explained, were useful for practice as they could be used with miniature distances often inside a building. This was an attractive option when long rifle ranges were not available. In addition, the modified rifle took a cheaper miniature cartridge, which saved costs. With the Morris tube it was believed that any person could have a range in his own backyard where he could train himself at small expense and with little loss of time. The only differences between the two forms of rifle were that the rifle with the Morris tube attachment had less recoil and the sound had less volume. Nevertheless, importantly, the shooting skills developed from practice with the Morris tube transferred when using the normal rifle.

The use of Morris tubes was seen an excellent way of developing rifle clubs for it was believed that their use would encourage young men to join. One of the difficulties of attracting the membership of young men was the distance to the rifle ranges which are sometimes miles away. A correspondent in the Sydney Morning Herald pointed out that ‘when a man gives up his spare time to learn the use of arms for the defence of his country without remuneration it is unreasonable to expect him to do so at a heavy cost to himself.’2 Moreover, the formation of rifle clubs was seen by some politicians, members of the militia, and members of the press as an effective way of developing a large body of expert riflemen who could come to the aid of the country in times of need. In other words, the development of clubs was a priority because they were seen as an excellent recruitment ground for a citizen army. 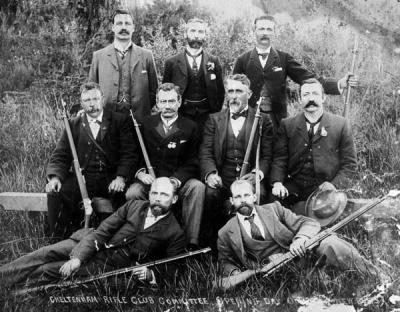 On 7 August 1900, several local residents accompanied Lieutenant Head to an inspection of Cheltenham Park to see if a target and butt could safely be provided for rifle practice with Morris tubes. It was decided to cut down a portion of the hill. Interested residents were asked to join a working party to achieve this goal.3 Thirty residents responded. Captain Stayner of the Cheltenham Rangers was in charge and good work was done with Lieutenant Head formally passing the site for Morris tube practice.

At a meeting of the Cheltenham and District Rifle Club a week later it was decided that uniforms were not required of members and the offer of the Protestant Alliance Friendly Society for free use of their hall for drill instruction once a week was accepted. It was also agreed to approach other rifle clubs to see if they would cooperate in building a safe range in the Cheltenham Park at an estimated cost of £150. The proposed location adjacent to the Cheltenham Railway Station was judged to be very convenient.4 On the initiative of Crs Penny and Le Page, the shire council gave the rifle club permission to use the Cheltenham Park for practice with the Morris tubes.5

For more than ten years from the time of its formation, the Cheltenham club passed through a difficult period. By 1912, the club was on the verge of disbanding, but the enthusiasm of some of the older members kept it together. It was decided to build a miniature range and a site was selected in Cheltenham Park, the long range in the park having been disbanded two years previously. The selected location in the park was rejected in favour of a proposal to purchase an allotment of land to establish a short range in the centre of the town on Charman Road, between Park Road and Railway Road. Initially, lack of finance impeded development, but after construction of the range and the building of club rooms were completed, Mr O R Snowball MLA declared them open in October 1912.6

The Cheltenham Club was interested in promoting the cause of rifle clubs and approached the shire council for a donation of £10 towards the erection of a miniature range on the Recreation Ground at Mentone where the committee had been granted a site. They also asked the council for £10 for extensions at their own site in Cheltenham. The reaction of a majority of councillors’ was positive, but Cr White opposed the idea.7 He referred to the pressing need to provide ordinary facilities to ratepayers and expressed the idea that they should not be voting any money away given the heavy overdraft the council was carrying. Despite Cr White’s argument, the grants were approved.8 Earlier, the Council agreed to exempt the Rifle Club from paying rates for the duration of the war but insisted the club should pay arrears.9 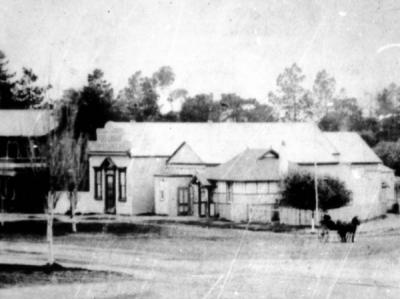 In February 1916, a special meeting of Cheltenham Rifle Club members at the Mechanics Institute was called by the captain of the club, Captain Wells, to consider the removal of the miniature range in Charman Road. Over thirty members responded to the call. There were three propositions put to the meeting. First, the removal of the present range at Cheltenham to Mentone, where land had been procured free. Secondly, to enlarge the club room at Cheltenham and, thirdly, sell the land in Charman Road to liquidate debt on the property.

Discussion of the propositions revealed a move to Mentone would require the selling of the Cheltenham property to pay off the existing debt of about £70; this was a property towards which some members had an emotional attachment. The club had been formed by enthusiasts some sixteen years ago and had experienced some difficult times. Moreover, this was the club that had eighteen members serving overseas and their desires needed to be considered. There was agreement that the noise of exploding rifles caused some irritation to neighbours and the conveniences were not suitable ‘to entertaining visiting members with any degree of comfort.’ If the membership of the club grew to 150 the current range would not cope. Towards the conclusion of the meeting it was resolved by 18 votes to 12 to remove the range from its existing site. A second motion was then proposed naming Cheltenham Park as the preferred location, 15 votes to 13.10

The annual meeting held in April 1916 at the Cheltenham Mechanics’ Institute heard of the successes of the past year. Membership of 126 was a record number, 61 members had completed the musketry course and 26 were on active service. Drills were held monthly for a few months then abandoned because members failed to attend regularly. The Mentone Skating Rink was rented by Mr J J Rogers for the fortnightly drill and the Mechanics’ Institute gave the free use of their hall for alternate weeks.11 The subsequent annual meetings of the club in 1917 and 1918 reported the debit balance from 1916 had been wiped out, but membership had declined. It was also proposed and passed that the decision made at a previous annual meeting to move the rifle range from Charman Road to Cheltenham Park be rescinded. It was emphasised that members needed to attend more frequently and regularly and see it as a duty to provide support for the future defence of their country.12

Lacking a suitable and convenient rifle range by 1919 the Cheltenham club realised that it was in trouble. The Langwarrin range had been closed for some time because it was too close to local settlement. Based on this information, a club meeting proposed that it should disband, but the Supervisor of Rifle Clubs told members that there was a chance of reopening the Langwarrin range. Given this situation, the Cheltenham Club decided to await further developments before finally making a decision.

In a meeting attended by 30 members in 1921, the proposal was put to wind up the organisation and dispose of the club’s assets. Clearly there was no likelihood of Langwarrin re-opening so the resolution was accepted. Members in possession of rifles were requested to return them to the club captain or secretary immediately.13

The passing out of another organisation in the district is to be regretted, and the lack of interest in local affairs displayed by residents to be deplored. Smaller towns in the country have healthy social organisations to provide for the entertainment of its citizens, and there is no reason why Cheltenham should be taking a retrograde step in these matters. Active organisations are an indication of prosperity.14