Early in 2008, the Mordialloc and District Historical Society began to devise a heritage walking trail for Mentone. The route chosen began at Mentone Station and threaded its way through many sites in the town stretching down to the hotel near the beach. The ‘Friends of Mentone Station Gardens’ happily cooperated in this project and agreed to have the starting point at the station entrance where an attractive marker was installed, complete with historical data and a photo dating back a century. ‘Friends’ members also joined with the historical society in protest meetings over the building planned to replace Le Gym near the railway gates. It was planned to be six storeys of apartments, but the protest caused a reduction to four. 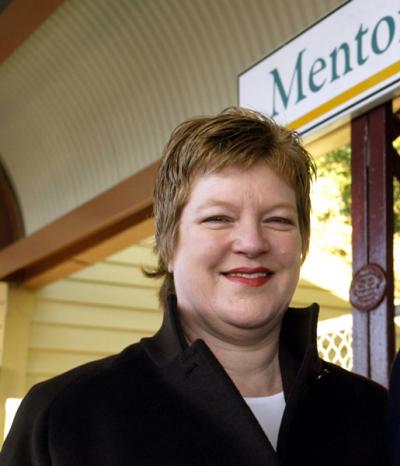 In March, Janice Munt MP unveiled the State Heritage plaque, verifying the site as historically special, and underlining the work of the ‘Friends’. There were more visits by VIPs during the year. During September John Brumby, Premier, chose the station to announce an extension of Smart Bus services and then spent an hour touring the gardens and station buildings as well as staying for lunch in the workroom. He later personally wrote to the ‘Friends’ expressing his congratulations on their work and his thanks for the hospitality. In the same month, Geoff Young, General Manager of Connex, arrived with his management team to acknowledge and congratulate the ‘Friends’. Mr Young then gave $5,500 to help with the work, especially the Youth Engagement program. Connex (the company responsible for managing the rail system) and the Transport Department asked the ‘Friends’ to extend their ‘know-how’ to other community groups, friends of stations, or entities in community work elsewhere. Dorothy Booth has done many of these educational talks, the IBM-supplied laptop and projector coming in handy. Chelsea, Bonbeach, Mooroolbark and Laverton groups were all happy to have Dorothy present the ideas that have made Mentone Station and Gardens the envy of community workers everywhere. 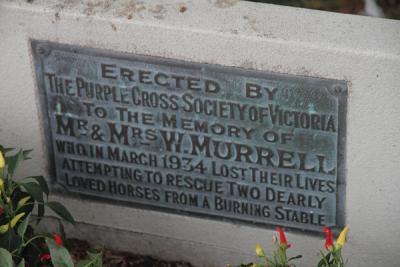 Despite the national flag being stolen, and having to be replaced by Senator Mitch Fifield on several occasions, the 2009 New Year and the early months that ensued brought continued improvements and more enthusiastic activity sponsored by the ‘Friends’. New attractive signage to mark the start of Mentone Historical Walking Trail and the Garryowen Horse Trough story added a touch of class to the station area, while new Chinese elms replaced inferior flax plants. Circular seating around the Norfolk Island pine tree helped further in making the gardens a place of passive recreation and rest.

In March 2009, the Royal Agricultural Society, Mordialloc Historical Society, and the ‘Friends’ put on a memorial function around the horse trough to mark 75 years since the Garryowen fire tragedy that ended the lives of Bill and Violet Murrell. Posters in the waiting room, liberally illustrated, explained the history of Garryowen to many of the crowd members who attended. Marion McKinnon’s beautifully illustrated book on Garryowen and the Murrells was launched in the Old Bakery Museum.

The Victoria Police Pipe Band performed again in the gardens in May and later that month a large rally, sponsored by ‘Friends’, gave vent to concerns about appropriate sanctions for juvenile offenders such as graffiti sprayers. A petition was circulated and later presented in State Parliament by Janice Munt and Murray Thompson, local members from opposite sides of politics.

A New Chairperson and an Honoured Patron 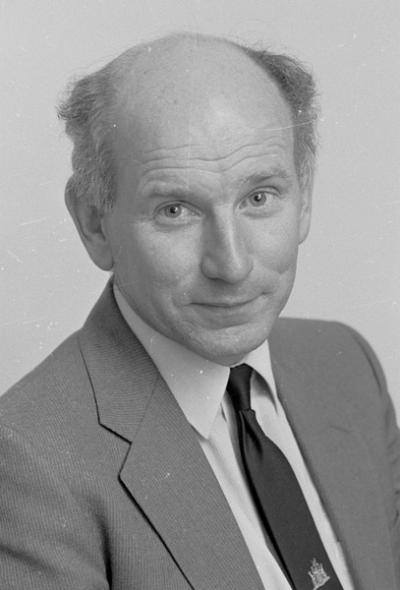 At the 2009 Annual General Meeting, Garry Spencer resigned as Chairperson to be replaced by Dorothy Booth, while Marj Kean became working bee co-ordinator. Penny McGuire-White accepted the secretarial position. There was a big welcome for Peter Spyker, a former Transport Minister who agreed to become patron of ‘Friends’.

Early contact was made with Metro, the company that replaced Connex in the running of the rail system, and the signs looked positive for a good working relationship with the new operator. Peter Spyker attended the sausage sizzle at year’s end when it was apparent that the ‘Friends’ had become even more effective in their chosen domain in central Mentone.

During 2010, the ‘Friends’ program continued smoothly; there was constant co-operation with the local police on control of graffiti and vandalism, as well as great work by Kingston Council’s staff. New seats were installed and the boomerang flower beds looked better than ever. Lobbying continued for extra surveillance cameras and a set down/pick up, ten-minute parking space near the upside station entrance. St Augustine’s Opportunity Shop again gave a generous grant to help ‘Friends’ in their work. The police pipers played again and historical posters in the waiting room continued to attract notice, especially the ‘Mentone Mansions’ series. 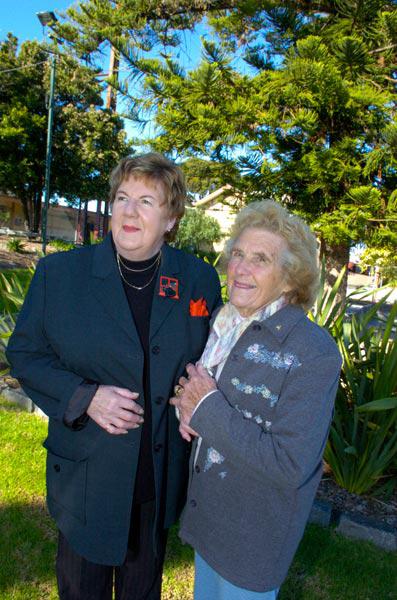 Dorothy Booth and Shirley Straker receive a Council Award on behalf of Friends of the Mentone Garden, 2006.

Throughout 2011, the Friends worked to preserve the station's gardens and the bright, clean facilities around the platforms and waiting rooms. As the tenth anniversary neared, there was a sense of pride at what had been done by the volunteers in that time. The group was acknowledged by Kingston Council when it gave Friends of MSG the Community Group of the Year award for 2011. This was a triumph and it showed that those in authority had appreciated the decade of devotion to community shown by Dorothy Booth and her loyal members. 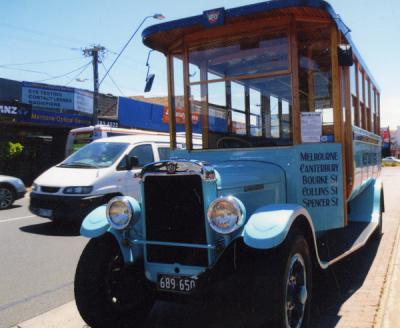 In 2012, the Friends group let the public know that the Mentone Station building was about to reach its century, having replaced the original building that was destroyed by fire in 1913. The rally of 2012 attracted many people, including students from several of our Mentone schools. It also brought to Mentone the original Ventura bus, a 1924 model, shining cutely in its bright blue colour that all Ventura buses once displayed for easy recognition until recent years.

Since 2012, Dorothy Booth has remained president of Friends and has worked consistently to lead the group and to create interest in its work among community members. She also keeps Kingston Council informed of the Friends' work and briefs other organisations that become relevant at various times.

On April 11th 2014, Mentone Station's main building reached the age of 100. On that day, the Friends put on a Family Fair celebration in the gardens. There was a grand sausage sizzle. A wonderful historical banner was unfurled, the work of Kilbreda girls and several groups, including Kingston Council workers. Entertainment by Kilbreda singers, the Church of Christ puppets and Bayside Bullets kept the crowd happy. The highlight was the arrival of Ventura's blue bus that had first rolled into Mentone in 1924, starting a service by many buses since then.

In 2014, there was some angst about the pick-up and set-down spot outside the main station-entrance walkway. It is important that elderly or disabled train travellers can access the station entrance without having to walk very far from the vehicles that drop them off. Kingston Council, Metro, and Friends of Mentone Station Gardens have had discussions about policy on this matter, but it remains a sore point as the solution is not easy to agree upon.

During 2015, St Augustine's Opportunity Shop provided some funds for the planting of flowers and shrubs on both sides of the station. They contributed to the overall $2000 that went to this planting project. It should be noted that the Kingston Council's workers in the parks and gardens section have established brilliant displays of blooms every year since that time. Mentone shoppers and travellers have a colourful space in the main street that few suburbs anywhere enjoy. Petunias, marigold and phlox, as well as daffodils, jonquils and freesias, each in their seasonal time to flower, make pretty borders around paths and trees.

New Myki readers were installed on the down side, allowing patrons to save time by leaving the platform further to the south through an extra exit. This change is expected to be welcomed by travellers. The new exit could be closed if ever we return to tickets being manually checked at the main exit.

In 2015, the Friends Group met with the new LXRA (Level Crossing Removal Authority) and the report from that meeting was disappointing. There appeared to be a reluctance to divulge what actions were going to take place and when, so the Friends had no basis on which to plan and offer suggestions about the project.

Skyrail was discussed as the year went on. Eastern suburbs are getting Skyrail and the process of building it has started, but nobody knew about plans for the Frankston line. Friends’ members were certainly concerned about this as, if implemented, it would make great changes to the line through Cheltenham, Mentone, Parkdale and Mordialloc. There was also mention of the line going into a trench under Balcombe Road and through Mentone Station. This would be just as disruptive, depending on the detailed plan of the route and dimension of the trench.

The early months of 2018 brought new challenges, especially concerning the reported plan to move Mentone Station's main building further south, and the doubt over the railway's exact route through this suburb. It seems likely that the line will be dropped to proceed through a trench in the section just north of Mentone station and for some distance to the south as well.

In 2018, there are challenges concerning how the group responds to the plans of the Level Crossing Removal Authority which are not yet firmly in place. Mentone's 'village' ambience, so important in its appeal to residents and visitors alike, will be threatened by the population growth in our region and the resultant need for more sophisticated rail transport infrastructure.

The Friends group has had significant effects on the developments around Mentone Station in recent years. The group, under Dorothy Booth’s leadership, has lobbied Level Crossing Removal Authority (LXRA) to modify the effects of the projected level crossing removal and save most of the station gardens from extensive tree removal and dramatic reduction in green space. The Friends group is now consulted when building works or other changes are likely to harm the congenial nature of the station precinct. Connex, and now Metro, know Mentone has a group of residents who enjoy the unique surrounds of their transport hub. There are regular social events on Saturday mornings in the gardens when groups of dancers or musicians come and entertain the shoppers doing their weekend spend-up. People loved the ukulele players who strummed great tunes in May 2018.

Sadly, vandalism and graffiti are still problems around the station and create removal work regularly. Dorothy Booth has been determined to have graffiti removed promptly so that the perpetrators get little joy from their stupid activity. The Friends of Mentone Station and Gardens group has been a living community asset since the year 2002, ensuring that our central transport hub is the envy of many other suburban groups.