With the creation of the colony of Victoria in 1851 and its separation from the colony of New South Wales, land previously occupied by squatters was surveyed on instruction from the new government and divided into portions for auction. Alexander Macdonald, previously a squatter, purchased 453 acres east of the Mordialloc township and subsequently sold it to William McLorinan a Mordialloc contractor. McLorinan in turn sold it to the Victorian government for use in their closer settlement project.1

In 1904, the government introduced into the Victorian parliament the Closer Settlement Bill which gave them authority to purchase land, subdivide it and make it available to settlers to achieve a more intensive use of land. At Mordialloc, thirty eight allotments were created and settlers moved in with their families. Together the settlers formed the Mordialloc Small Holdings Association and members elected Jorgen Anderson as their president. Anderson had come to Victoria from Denmark where the idea of small holdings originated.

At the beginning of 1910, the Premier of Victoria, Mr Murray, together with the local Member of Parliament, Mr Keast MLA, met with the majority of the Mordialloc settlers at the home of Jorgen Anderson. It was at this meeting that the settlers took the opportunity to present to the Premier their needs.2 One of these requests was a school for the children of the families living on the estate. Prior to this time the children were expected to attend school at Mordialloc, but this was not easy as the roads were often flooded and children were required to wade through water knee deep in places and sit in school all day with wet feet.3

Yet it was not until May 1915 that the Education Department responded to the plea of Mrs James Follett for a school to be built for the benefit of the children living on the settlement. The school was built on land in Boundary Road, leased from the Count Edward Fonceca Estate at an annual rent of £3. The rental remained at that level until the Department purchased the land in 1940 at £45 per acre. The school was a wooden structure capable of accommodating 50 children and was initially called the Mordialloc Settlement School. Instruction commenced on 25 September 1915 with Margaret Dickson as Head Teacher. The school was officially declared open by the Director of Education, Frank Tate, on 11 October 1915.4

Margaret Elizabeth Dickson was 28 years old and sole teacher when she took up the temporary appointment as Head Teacher at the school. Previously, she had held various short term appointments, starting in 1913 in country schools. None of the appointments lasted longer than one year. Her temporary appointment at the Mordialloc Settlement School ceased on 31 December 1915. In 1916, her District Inspector described her as a ‘good teacher, quiet and earnest managing fairly well. Employing good methods. Very good discipline.’ After matriculating from Melbourne University she went on to complete a Bachelor of Arts degree with passes in history and English. In 1917 she became a temporary assistant at Ararat High School. Later she taught at Leongatha, Dandenong, Hamilton and Horsham secondary schools.5

In May 1925, Mr T Knowsley, the Correspondent of the School Committee, wrote to the Secretary of the Education Department asking that the name of the school be changed to Braeside, as the district and the local post office were known by that name. The following month, Mr Knowsley was informed the name of the school had been changed to Braeside as the School Committee wished.6

Mr James Hurley commenced as Head Teacher in February 1926 and was quick to apply for a sewing mistress but was informed that such an appointment could not be made until the enrolments reached 35. He also applied for dual desks and was a little more successful, being told that steps would be taken to supply the desks from surplus at other schools.

A few years after his appointment to Braeside, James Hurley was subjected to some criticism from the local District Inspector on the condition of the gardening plots and lattice at the school. A letter from the Education Department’s Secretary in June 1933 gave a favourable response to Hurley’s efforts to improve the garden plots and expressed the wish that appropriate action would be undertaken in relation to repairing the lattice. The letter went on to say that while Hurley had rendered satisfactory service in terms of instruction there was evidence that more needed to be done, but noted his willingness and appreciated his undertaking to remedy the defects.7

Hurley was replaced the next year with the appointment of another Head Teacher, but criticisms of the school continued. The District Inspector was detailed to investigate parental complaints that a laxity in control had developed at the school. In his report on the teacher he wrote:

…your method of conducting your examinations you have, while not demonstrably guilty of irregularity, been generally very lax in control. Pupils have been allowed to re-write worked sums on new sheets of paper. You have failed at times to exercise close supervision over monitors and over pupils working outside the building. In permitting such laxity in organization and control you have failed to realize your responsibilities as head teacher. ..… in your own interests, as well as in those of the children, you are requested to apply without delay for transfer to another school.

As a result of the inquiry, the Department informed the School Committee that measures had been taken to prevent a recurrence of the problems. Despite this reassurance, the District Inspector who visited the school later in the year reported concerns about levels of achievement by pupils and quality of instruction. This led to a sharp response in the letter to the teacher from the Secretary of the Department.

You are asked to furnish an explanation of the defects and to advance any reason why you should not be dealt with for neglect of duty.

The report of the school inspection provides some insights into the conduct of schools in the 1930s, the difficulties experienced by young teachers trying to cater for a range of student abilities, and having to deal with multiple grade-levels while following a prescribed curriculum.

The first and second grades are below the average a good deal. Needlework is very good, but there is little sign of any occupation work except gardening and that, judging by the garden, has not been taken seriously. Agriculture is taken as the science but there are no experiments and practically nothing except a few broad beans in the garden, to show that it is taken seriously. Geography and history have been very neglected. The seventh grade children tell me that they have merely read to each other from children’s text books. The seventh grade knowledge in these subjects is practically nil. Very poor results indeed were gained in English and Arithmetic by the seventh grade. The sixth also shows considerable weakness. 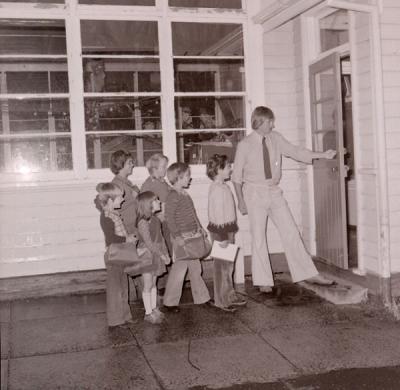 In 1937, the Head Teacher was in trouble with the Department for the way he handled a problem with a member of the School Committee. He wrote to the Department reporting that he had expelled Mr Arthur Keem, the Correspondent for the School Committee. The Department’s Secretary reminded the Head Teacher that members of school committees were appointed by the Governor-in-Council and no member could be removed from office by the remaining committee members. It went on to say that if it was desired that Mr Keem be removed, a full report on all the circumstances of the case should be forwarded for the consideration of the Minister for Education. Apparently, the School Committee believed Mr Keem held £6-13-11 belonging to the school. Subsequently, Mr Keem was requested to hand this amount of money to the Head Teacher or to the Treasurer of the committee. He did so.

Because of Mr Keem’s departure from the School Committee, the Head Teacher was informed that the committee did not have the power to appoint a replacement; this was a matter for parents. Consequently, the teacher was advised to convene a meeting of parents to elect a replacement, noting that Mr Keem was not eligible for re-election. This was done. 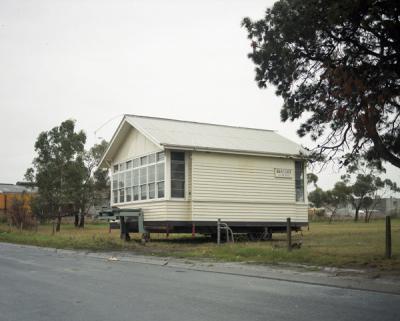 Braeside State School mounted on trailer ready for removal to another site after school was closed, 1976.

Sixty one years after the founding of the school, it was closed. The buildings were removed and the land was sold for industrial uses. The school had been dropping in enrolment numbers for some time with residential housing being overtaken by industrial growth. Some parents saw social and academic benefits for their children attending the new Parktone Primary School in Robert Street, Parkdale, where pupil enrolments were significantly larger and a normal class structure was operating. At the time of the closure in 1976, Braeside State School had only six pupils after four families left the area and the possibility of increasing that number seemed remote.

The school community celebrated the contribution of the school over many years with a Back to School event on 13 February 1977. It was a sad occasion for some, but also a time to reminisce on the good times.8