The small triangular real estate office building which stands opposite Kilbreda in Mentone’s main shopping area has long been a curiosity. The small island block in the town’s centre has remained throughout a century of development and people wonder how it came to be there in the first place. This is how.

In 1883 Matthew Davies was busy drawing up plans for his new town of Mentone. He had bought much of the land that now is central Mentone from the estate of Alexander Balcombe. Balcombe, who died in 1877, had used the land as pasture for cattle, which he transported from his Mornington property. Davies saw the potential of the attractive district comprising open areas interspersed with tea-tree copses, stands of eucalyptus, and other small trees. Its soil was workable sandy loam and the beach was beautifully unspoiled. He began to build on his dream of creating a new Riviera in the south. His town would be a fashionable holiday resort similar to those on the Mediterranean where rich Europeans went. Hence the name ‘Mentone’ and the Italian street names.

The focus of this dream was the large building in the centre of the town which became the Royal Mentone Coffee Palace. It was next to the convenient rail transport that had reach Mentone in 1881, making the Davies plan feasible. The Coffee Palace was of grand Italianate design and it dominated the local scene, no doubt impressing the well-to-do guests who came to stay in it. The first guests alighting from the train had an uninterrupted view of the building with its impressive tower, for in front of the palace was a triangular reserve of lawn and garden beds. No records survive to tell us how well the small reserve was maintained, but it had no building on it until well after 1900, Davies having planned the open space to allow a grand view of his showpiece building.

When he developed Mentone Davies did it through a series of companies which were part of the Land Boom of the 1880’s. To build Mentone’s central attraction he established ‘The Royal Coffee Palace Company Ltd’ and this body assumed ownership of the necessary land in mid-Mentone. The building went up in 1887 and for a few years hosted many well-heeled guests. In 1888 the Governor of Victoria, Lord Loch, and his lady, visited the place as part of a tour of duty that included opening the Mentone Race Course. But the depression and bank crashes of the early nineties ruined the dreams of Davies and many others, sending them into insolvency and creating hardship for most Victorians.

Sir Matthew Davies went bankrupt and his Coffee Palace was acquired by the Mercantile Bank which owned it until the Brigidine Order bought it in 1904 to establish a convent school. Curiously, Davies and his fellow solicitor Charles Price of Chancery Lane, Melbourne managed to buy the triangle reserve which passed into their names in January 1895. It is difficult to know why Davies hung on to the small block. Perhaps the bank did not want such a small block in times of very depressed prices. Or perhaps there was some deal done. Davies had been a big shareholder in the Mercantile Bank!

Sir Matthew’s fortunes plummeted so badly that he needed to realise on all his assets meaning that the small reserve had to be sold in November, 1896. It was acquired by a Mentone estate agent, William Drew, and sold to a Carlton draper’s salesman, William Robertson, six months later. This many may have intended to branch out with a new shop in Mentone, but whatever he had in mind is now unclear for it remained unoccupied and probably untidily overgrown in the town centre for nine years.

In June, 1905, Alfred Small and Herbert Edwards bought the block and shortly after they erected the brick building to house their real estate office. Small and Edwards ran this extremely successful estate agency from central Mentone for many years, and they established another office in Mordialloc. For many years they let part of the small triangle as shop sites alongside their estate agency. Dave White, who later became a Moorabbin Councillor and later still Mordialloc Mayor, ran a hairdressing business on the site from 1906 until World War I. A chemist and then a dairyman rented part of the site as well for a few years after 1906. 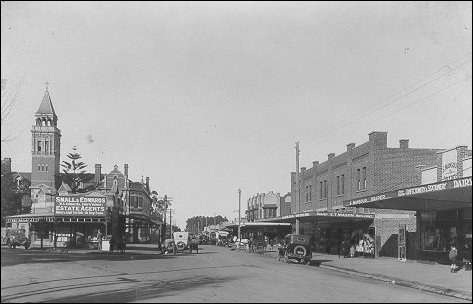 The rented section of the triangle has housed numerous other businesses since the First World War. Hairdressers catering for each of the sexes were there during the twenties and thirties, while the Commercial Banking Company of Sydney moved in for a time in the late thirties until the war years. From the forties to the sixties Stanley Cycles, a sales and repair business, operated from the premises, but in recent years the estate agency has used the entire site.

Small and Edwards dealt in the local property market for over half a century becoming one of Mentone’s best-known business entities. Both men had been involved in local politics going back to the days of Moorabbin Shire and the severance question which saw Mordialloc municipality created in 1920. Their business was bought by Hill and Co, which ran the estate agency from 1961 until the 1990’s when Hocking Stuart took it over. 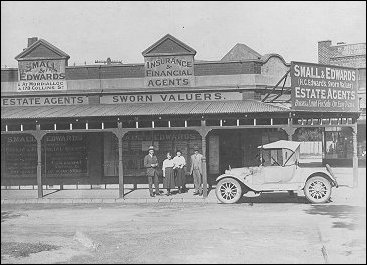 The man who was responsible for the triangle in Mentone’s heart, Sir Matthew Davies, practised law in the city following fraud charges against him in the wake of the bank crashes in 1893. Davies escaped penalty because his companies were so complex that nothing could be proved to incriminate him. He returned to live in Mentone Parade in 1908 and died at his home there in 1912. In his last years he must have walked past the triangle and the former coffee palace many times. One can only speculate as to his thoughts about what happened to the dream!