In Kingston, we are accustomed to nearby suburbs that are full of industry, such as Moorabbin, and Braeside. Beaumaris is definitely not one of those suburbs, but it almost was. Detailed plans were drawn up setting out the site of a large factory surrounded by houses intended for employees to live in. This site occupied most of Beaumaris.

Dunlop Rubber had manufactured tyres in Australia since the 1890s, with factories at Montague, Victoria (described as a black hole) and Drummoyne, New South Wales. After World War 2, their product range included tyres for bicycles, cars, and trucks, rubber hose and belting, sporting goods, Dunlopillo mattresses, and furniture.

In 1935, a new General Manager of Dunlop Australia, Wallace A Bartlett, arrived from Sussex, England, to head the company.

Bartlett wanted a new factory in a new Melbourne location to replace Montague. In 1939 he bought 248 acres (100 hectares) of land at Beaumaris. This figure is used by Geoffrey Blainey in his 1993 Dunlop history ’Jumping Over the Wheel’, while estimates in various websites claim 500 acres/200 hectares, 300 acres/120 hectares. 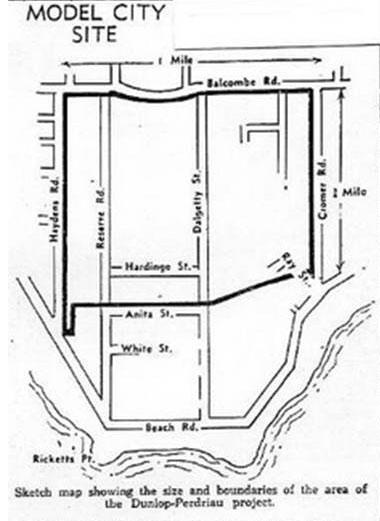 Sketch map showing the size and boundaries of the area of the Dunlop-Perdriau project.

He envisaged a big, modern factory surrounded by a garden city. The huge block of land owned by Dunlop was bounded by Balcombe Rd, Cromer Rd, Haydens Rd, and went as far south as Anita St, south of the present-day Concourse shopping centre.

The factory was to have one million square feet of production floor, a 1,000 seat canteen and the most modern amenities for staff.

When World War Two broke out, Bartlett’s plans were shelved for the duration, but after the War, labour and materials were both too scarce to progress the plan. Bartlett died at a young age in 1947, and initially the board retained his vision, even proposing to name the suburb Bartlett. However, land values were rising rapidly, so in 1950 the board decided to abandon Bartlett’s dream.

Instead, smaller factories were built in numerous country towns, using local labour and costing much less than the huge utopia proposed at Beaumaris.

The Dunlop board decided to sell the land, and The Argus reported in May 1952 that Dunlop land had been town-planned and would be sold for housing later in the year.

‘This large tract of bushy land by the water was ripe for post war development. Architects and creative people of all fields, including writers, artists, actors, fashion designers, graphic designers, fabric designers, ceramicists and lighting designers were attracted to the natural landscape of the area. All looking for something different to the usual sub divisions.’

One local architect has been quoted as saying that about 50 architects lived in Beaumaris during the fifties and sixties.

And so began the quietly isolated and bushy suburb favoured by so many creative people, especially during that period.

Dunlop later built lots of smaller factories in scattered locations where local labour would be plentiful. Most were in country towns, but they had a battery factory in Spring St, Sandringham, and a Dunlopillo foam-rubber factory in White St, Mordialloc that burnt down in about 1980.