In 1948, Nola Barber was the first female to be elected a councillor in the City of Chelsea. In that same year she commenced her advocacy for the creation of a library for Chelsea and persisted for twenty-four years until her dream was realised in 1972. In this long crusade she had to contend with opposition from some of her male counterparts and residents who argued for other priorities for their young city. 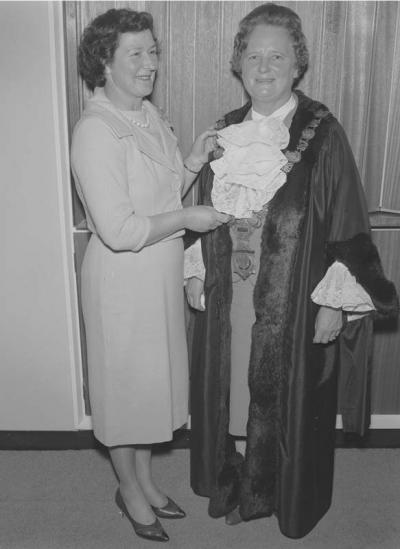 Nola Barber first moved a motion in council in October 1948 calling for a survey be made by the Town Clerk ‘for the guidance of the Victorian Library Board, as to the needs and resources of the City of Chelsea as to libraries for children and adults.’ 1 The motion failed to gain support, but a Library Promotion Committee was formed to organise public meetings where the case for a library could be presented, and to prepare petitions and organise deputations to Chelsea Council. Cr Barber was a prominent member of this committee.

Following representations by the Library Promotion Committee in 1966, the council agreed for the committee to negotiate with the City of Mordialloc for a joint library service. Subsequently, several councillors withdrew their support for the venture, their action resulting in the matter being deferred for two years.

In 1968, a petition was presented to council, signed by two hundred Carrum and Bonbeach residents, objecting to a proposal to build a library in the municipality. They claimed that they were already gravely burdened with increased council and sewerage rates. Besides, they said, school libraries were satisfactory as a source of books for students. Cr L Payne challenged Cr Barber to resign and stand for re-election on the library issue. She did not take up the challenge. Cr Payne pointed out that shortly after the conclusion of the Second World War the council decided to spend its limited finances on paths and drains which would benefit all people living in Chelsea. This was in contrast, he believed, with just 30 per cent of the population who would use a library. In response, Cr Barber noted that only 200 out of a possible 25,000 local residents protested against the library scheme, indicating they were much wiser than she first thought! She said the parents who would find it hardest to pay for a library were the ones who supported the library move because they wanted their children to have the benefits of reading. The pensioners, she suggested, also wanted to read and derive happiness from books. 2

Other councillors challenged the view that schools were satisfactorily equipped with libraries as teachers and school committee members had not been consulted in forming this assessment. It was believed that false information about costs of establishing a library was circulated, and someone was racing around urging people to sign the petition. Moreover, doubts were raised about the legitimacy of some of the signatures appearing on the petition.

Despite evidence of some residents opposing the creation of a library at Chelsea, the councillors discussed and passed a motion to proceed with a regional library scheme with the City of Mordialloc. Five councillors voted in support of the motion to commit the municipality to the financial cost when residents were facing the burden of high costs in bringing sewerage to their homes. 3 A notice of motion was tabled to delay the signing of the agreement with Mordialloc and groups of residents began to raise petitions. Their hope was to collect thousands of signatures opposing the installation of a library. Mr Eric (Sandy) McDougall asked the council not to take any further action concerning the library without taking the proposal to the people in a referendum, but his plea was turned down.

A meeting on the 28 March, at the Presbyterian Church in Edithvale, was organised by the Chelsea Library Promotion Committee where invited speakers stressed the importance of libraries. Geoffrey Raymond, a television personality, said: ‘Only the people who have a library can live in a sophisticated society.’ Warwick Eunson, principal of Melbourne Teachers’ College and an advocate for libraries in schools, said: ‘If you leave this question undecided or deferred you mortgage the young children of your community’. Nola Barber the president of the Library Promotion Committee said the group was fighting for the city to have its share of culture. She argued that $3.47 per ratepayer per year was a small cost when it was considered that a good book could not be bought for that much. ‘When you realise that children will be able to have as many books as they like for this amount, it will be a great saving,’ she said. 4

A long-heated debate occurred the following week at a subsequent meeting of council. The public gallery was packed and interjections and hand clapping occurred interrupting the councillors’ discussion. Perhaps influenced by the unruly behaviour, the council rescinded the previous decision to join with Mordialloc Council in a regional library service. Six councillors voted supporting the motion while three councillors opposed it. One supporting councillor said, ‘one who disregarded the peoples’ views on this matter was a fool’. Cr Hummerstone said the cost of the proposed library building was enormous and the size out of all proportion to what was required. Cr Bert Thomas wanted the council to wait until the sewerage question was finalised and the council was in a better financial position. Cr Neil Stacey wanted the ‘slinging match’ to stop and favoured a poll to get the views of the people. 5

Council decided to conduct a poll on June 1, 1968, allowing individuals to exercise what some councillors believed was a fundamental democratic right: citizens expressing their views on the need for a library service. The Library Promotion Committee urged all parents to vote yes. The editor of the local newspaper gave the same advice to readers. In his editorial column he wrote: ‘knowledge brings enlightenment, wisdom and tolerance’. He believed the weight of opinion would favour a library. Yet his prediction was wrong. From a possible 27,603 voters, 6,202 voted against the library and 4,313 voted in favour.

Despite the 1968 survey, in which the majority of respondents rejected the idea of a library, by 1971 the Chelsea Council decided to join Mordialloc Council in a regional library scheme. Before the council decision was made three options had been canvassed in the local press. Firstly, joining the Dandenong Valley Scheme; secondly, joining with Mordialloc in providing the desired service; or thirdly, doing nothing.

The council focussed its attention on the first two suggestions. Cr Barbour, who had been an early and strong advocate for a library for Chelsea, favoured the larger Dandenong Valley Scheme which served three municipalities. She saw it as being able to provide a cheaper, but more comprehensive service with the inclusion of a mobile van, a computer that would save staff time, and a superior children’s library. A better coverage of subjects was available because of a larger book stock. In addition, the bigger system offered nine hundred periodicals in contrast to four hundred in the smaller scheme. Cr Payne believed the Mordialloc scheme was the better proposition, but was open to discussion. Cr Stacy wanted more information, while Cr Thomas was against both schemes. The mayor, Cr Johnston, was cautious. He wanted more time to think about the issues as new information had been presented. ‘After all’, he said, ‘it was the biggest decision council had to make (apart from the decision to have a library) and it’s important that we make the right one.’ A motion was passed to defer the decision. 6 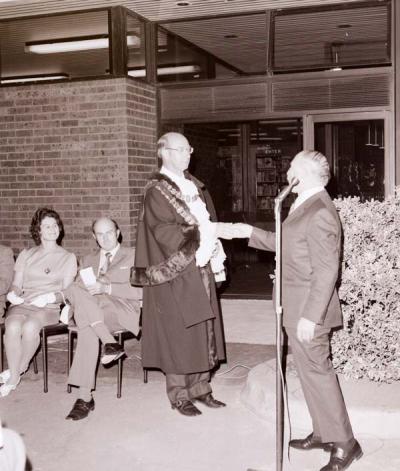 A number of people took the opportunity during the pause in the council’s decision-making process to articulate their views in local newspapers. Fed Up expounded a litany of issues that needed council’s attention before venturing into an expensive library arrangement. Generally, he believed the streets were in a disgraceful state, litter was everywhere, some footpaths were unmade and lacked curbing, rubbish was dumped on the foreshore, public toilets were inadequate, stray dogs roamed the streets and beach, there was only one collection of refuse, and no periodical collection of unburnable rubbish. 7 Les Girt, writing in the next issue of the local paper supporting the views of Fed Up, called upon ratepayers to be ‘up in arms’ to stop this ‘indiscriminating’ spending. On the other hand, John Stone welcomed the early decision to create a library that would benefit children and the older members of the community. Barry Hunter, Chairman of the Aspendale Advancement Association, warned that an essential service such as a library should not be measured in money terms only. 8 G Boyle went so far as to suggest that if Chelsea did not go forward and establish a library, the residents of Aspendale should consider campaigning to become part of the City of Mordialloc where a library service existed. 9

In July 1971, Mordialloc and Chelsea councils signed a joint service agreement and submitted it to the Governor in Council for approval. The new service was to be known as Mordialloc-Chelsea Regional Library. It was also agreed that the new service would be managed by a committee appointed each year with the chairperson’s role being filled alternatively between representatives of each council. The committee would have the benefit of advice and guidance from an executive officer and the chief librarian. 10 11 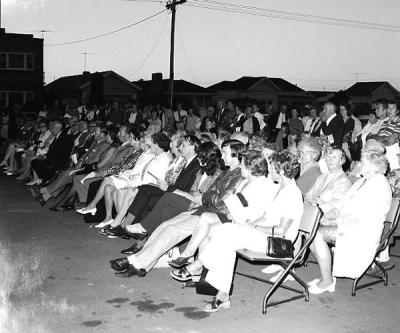 Approval of the agreement was given by the Governor in Council on 25 August 1971 and the starting date for the extension of library services to Chelsea was set for the first of October that year. In the meantime, volunteers from Chelsea gave up their time to catalogue a large number of additional books to be available on the opening day. In addition, the design for a library building in Bath Street Chelsea was accepted and occupancy was expected in twelve months. The successful tenderer was G W Dore Pty Ltd of Waverley with a quote of $60,836. For services in the interim it was planned to have a mobile library visit various parts of both the Mordialloc and Chelsea municipalities. 12

With the commencement of the building of the library in Chelsea on 23 August 1972, the Chelsea Library Promotions Committee had a celebratory meeting in which Cr Nola Barber was presented with a book and a sheaf of flowers in recognition of her significant and untiring efforts to gain a library for Chelsea. After a long struggle, the library, in its various configurations, became an important service provider to residents of Chelsea and beyond, just as it was envisaged by Nola Barber, the person who first raised the need in the Council of Chelsea in 1948. 13