Early residents of Chelsea disposed of their household waste on their own property and later into tips in a variety of places. One of these early tips was in Wells Road. Later, the infant municipality of the Borough of Carrum had a tip on the southern border of the shire located in the Shire of Frankston and Hastings on Eel Race Road.

By 1959 the tip was reaching capacity and the Chelsea Health Inspector reported that the depot at Carrum was unsuitable for any further disposal of rubbish and was offensive and dangerous to public health. Consequently, the Chelsea Council began looking for an alternative site. The City Engineer recommended grazing land owned by Gordon Collins in Scotch Parade. The recommendation was accepted. The Scotch Parade land, made up of Lots 11,12,13 and part of Lot 10, became the Chelsea Council Refuse Tip. 1 The engineer was instructed to arrange the planting of quick growing trees and shrubs along the Scotch Parade boundary of the area. 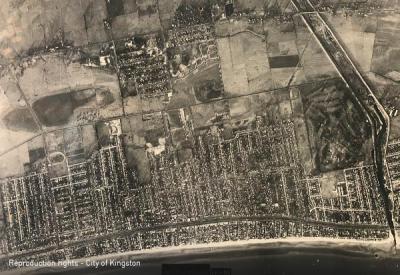 Household rubbish was dumped into trenches at Scotch Parade where the practice was to cover the rubbish with a layer of soil. Over time, the decomposing rubbish became a fire hazard with the putrid matter underneath the soil cover bursting into flames, which required the presence of the Chelsea Volunteer Fire Brigade to bring the situation under control. This was not a pleasant task as the stench was overwhelming. Ron Jacobs, as a member of the brigade, recalls that individual members sometimes failed to rally to the call of the fire bell knowing the source of the fire and the challenging conditions. A code was used when ringing the bell - one stroke at intervals, signified ‘North’, two strokes was ‘South’ and three strokes ‘East’. 2 The tip was referred to as a ‘hot spot’ by members of the Brigade and residents sometimes complained about the bad smell emanating from the site. While Cr Payne said he accepted the complaints about the tip he did not apologise as he felt sure people would in time congratulate the council on utilising the land.

In 1980 disposing of household garbage in the Scotch Parade tip ceased although people were still free to deposit trailer loads of building waste, pruned tree branches, old fencing and garden waste. This saw the beginning of moves to develop a multi-purpose reserve for the Chelsea and district community. The following year the first stage of a children’s playground was completed and 1985 saw the complete closure of the tip to allow further developments. In 1987 St Chad’s Baseball Club began to use part of the reserve as the home base of their club.

It was in 1988 that the Chelsea Council received grants from both the Federal and State governments to develop the area of the former tip as a multipurpose park. The grants were received under the Bicentennial Program which was established to recognise the 200 years since the 1788 arrival of the First Fleet from Britain at what became Sydney. As a reflection of the background to these grants, along with the council’s own contribution, the reserve was given the name of Bicentennial Reserve and professional landscapers were engaged to plan the reserve’s development. 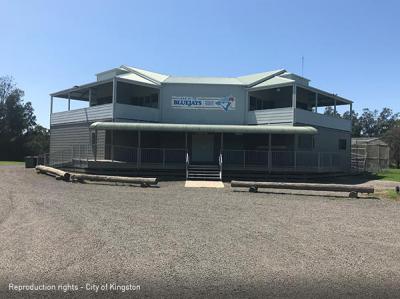 The Chelsea Council acted to improve the public facility based on advice received. One of the features of the new reserve was that mounds of earth were created to cover the refuse and trees were planted on the mounds. Depositing of hard garbage was banned in 1989, a skate park was constructed in 1990, a rotunda was built in 1993, and a new pavilion for St Chad’s Baseball Club was built in 1994 under special conditions because the structure was on a ‘filled section’ of the reserve. The building was on piles, allowing methane gas generated by the rotting material below it to safely evaporate in the air.

Since its inception in 1994, the Kingston Council has continued to develop the facilities of the reserve. On one of the mounds two long slides were built as centre pieces of a safe and exciting play space. Next to the slides is a Smurf village with a music hut, a story hut and a play hut complete with a mooing cow in the middle of the village. There is a host of other features to attract the attention of the young people of the municipality, including a sculptural garden, a shaded sand pit, a giant basket swing, hammock, the Mount Chelsea Express train, huge green grasshopper, stand-on spinners, spiral slide, rope climbing frame, stepping stones, chain traverse, tic-tac-toe, monkey bars, flying fox, and a wooden structure with various ladders. A new and expanded skating park for young people was incorporated, together with timber climbing poles and a DJ table. 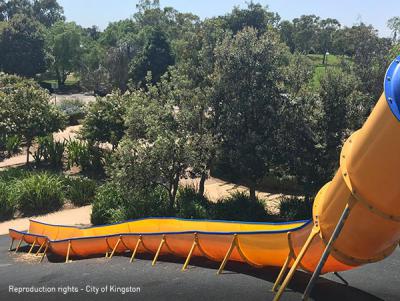 Provision was also made for parking, walking tracks, BBQ, and seats and tables installed where families could enjoy a day out in a safe environment.

This area has become known as ‘Mount Chelsea’ because of the view from the mounds and is frequently a location for community celebrations with music, sporting events and sometimes fireworks. What was once a barren and smelly piece of land, a source of complaint from residents, has become an award-winning reserve, a site for exhibitions, and a highly valued community asset.

The assistance of Ron Jacobs OAM in researching this topic is appreciated.