A single track railway line from Caulfield to Mordialloc was built in 1881 and a year later extended to Frankston. Five years later residents were arguing the single line was inadequate in serving their immediate needs and was inhibiting the development of the area. In their view, too long had passed without improvement. On 14 April 1887 a public meeting was held at the Cheltenham Mechanics' Institute to consider steps to be taken to bring the need of duplication before the Minister and Commissioners of Railways.

In the absence of the President of the Shire, Cr Abbott of Sandringham, Thomas Attenborough chaired the meeting. Abbott's absence caused some disquiet amongst the audience, but he had informed the organisers of the meeting that, as he had virtually resigned the office of president, he was not justified in taking the chair, but he wished the meeting every success. At the time many individuals in the Western Riding of the shire (Sandringham, Hampton, Black Rock) were seeking severance from Moorabbin and more focused on the development of their area and gaining freedom from the dominance of market gardeners in the governance of the shire. 1 This may have influenced Cr Abbott's decision as a Sandringham resident.

George William Taylor, a notorious auctioneer and land speculator, was a key member of the group of men who arranged the Cheltenham meeting to address their business interests. 2 He believed people had been very patient concerning the lack of action by the railway authorities when compared with services provided in other locations. There were fewer train services each day, and the duration of each journey between Mordialloc and Melbourne was excessive. Taylor said it was a disgrace! He suggested businessmen could not afford to lose the two hours and a half that was consumed in that journey each day, particularly as people knew that it could be done in a much shorter time under proper traffic arrangement.

At least part of the problem was the amount of shunting required. There were three places on the journey up and down the line where the train had to be shunted to a siding to allow a train travelling in the opposite direction to pass on the single track. These shunts and stoppages needed to be eliminated, Taylor argued. In addition, the line needed to be duplicated because of the increased number of passengers travelling to the beaches for pleasure during the holidays and the increased level of danger this entailed. Moreover, the line was a profitable one and with duplication there was the potential of trebling the profits of the Railways Department. Cr Ward suggested that Mr Gillies, the Minister of Railways, would not be able to put them off with the stereotyped reply, ‘I'll give your case serious consideration’ and then do nothing.

Taylor claimed it was the inaction and acquiescence of Moorabbin residents that resulted in them getting nothing done. He stressed it was their duty to demand parliamentary representatives advocate their case because, unless the current conditions and railway traffic were altered, the district would not progress. For example, he argued that the old fashioned and time worn carriages used on the Mordialloc line, called cattle trucks by some, needed to be replaced.

Joseph Davies, another businessman, land salesman, and Mentone resident, pointed out to the meeting that four years previously there had been significant property investment in district land. People were settling in the district, the population was growing, and property values were increasing at a satisfactory rate. Suddenly, this development had been brought to a halt.

Although he recognised several factors were involved in this stagnation, he claimed that one important one was the action the Railways Department had taken in ceasing to issue return tickets to Mordialloc and in declaring Mordialloc as being outside the suburban radius. This action resulted in increasing the fare by 30%. Development almost became paralysed, with much building suspended. Development of Mentone was put back three years, he suggested. Stoppages on the line were too frequent and too long in duration, spoiling the enjoyment of holiday makers. Fortunately, after representations to the department, the district was recovering, and this made the duplication of the line imperative.

The motion was carried.

On 2 May 1887, less than four weeks after the Cheltenham meeting, a deputation of residents together with parliamentarians Messrs Bent, Dobson and Balfour met with the Railway Commissioners to seek improvements on the railway service Caulfield to Mordialloc. 4 As Thomas Bent explained, the main purpose of the deputation was to ask for the duplication of the Caulfield to Mordialloc line. George Taylor, a member of the deputation, explained to the commissioners that, despite rumours, the delegates were not self-seeking land developers wanting to reap the benefits of a duplicated track. This was not the case. Rather, they were there as representatives of district residents to advocate their desires and to ask that they be implemented.

Various reasons were advanced to justify this request. They included: the line was required for military purposes, the commercial inconvenience caused by absence of a duplicated line, there were no engineering difficulties that would prevent duplication, and children attending schools in Melbourne would be able to leave and return to their homes at reasonable hours.

Expanding on these reasons he said that during the Easter military encampment held at Langwarrin some of the trains were an hour behind schedule. Trains were frequently delayed by shunting, which took place at the different stations. Also adding to the problems was the increasing number of special trains engaged to convey large picnic parties to Mordialloc. If the line was duplicated all these delays would be avoided.

Another in the deputation, Mr Ferguson, threw in an additional concern related to safety. He worried about the bad characters congregating at metropolitan railway stations and suggested police constables should be stationed at the railway stations to prevent dubious characters from assembling there. He said recently he had been astonished to see a number of questionable characters at Princes-Bridge when school children were proceeding to their picnic at Mordialloc. 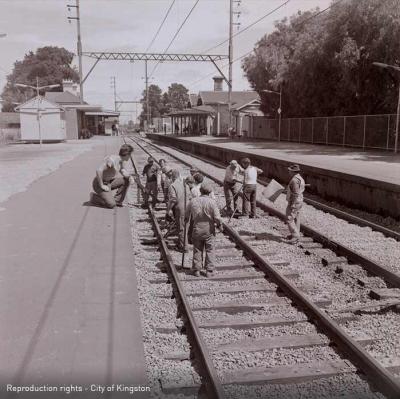 Workmen on the line at Cheltenham Railway Station.

Mr Speight, the chief commissioner, stated that the commissioners would like to see all the suburban lines duplicated but it was a question of cost. If Parliament would be willing to incur the expense the commissioners, he said, would not hesitate to carry out the work. There was nothing exceptional in the case of the Mordialloc line to single it out for duplication, but on the broad principle of doubling lines they would like to see the duplication carried out, to meet an unusually heavy traffic which took place at certain periods of the year. However, he warned, it must be borne in mind that the time occupied by a train journey was regulated by the number of stations it had to call at.

With regard to continuous brakes, the Westinghouse brake was now being fitted to the Mordialloc trains. The commissioners had already given the Mordialloc trains a share of the best carriages. While they would like to provide better ones, the deputation would have to wait for them like other districts. As a general principle the commissioners thought that if they could make money they ought to do so. At the same time, they also thought it was better to anticipate a public want than to wait until it had been demonstrated.

In September 1888 it was reported that the Mordialloc duplication line was nearing completion and use of express trains was being contemplated. 5 By June 1889 the duplication of the railway track from Caulfield to Mordialloc was completed and local residents changed their focus to the need to increase the number of trains on the Mordialloc line, the need for better scheduling to meet travellers' requirements, and the demand for express trains. They saw these developments as promises that the commissioners had agreed to address once the duplication of the line was completed. They remained points of tension for some time. 6