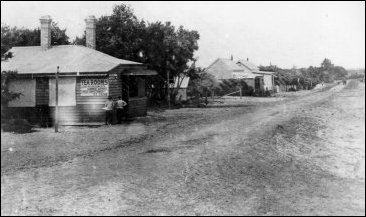 Good Friday, an extremely significant day in the Christian year, was the day in 1934 that Edward James Bowman chose to conduct a dance at the Bayview Tea Gardens. It was also a day in the year that Council regulations, it was believed, prohibited dances being held in licensed premises.

On hearing music from the corner of Harding Street and Point Nepean Road Constable George Robert Gilding went to investigate. He found a number of people on the footpath outside the premises owned by Alma Isbister and thirteen couples inside dancing to the music of an orchestra of three players.

Mrs Isbister, when confronted by Constable Gilding said she thought "there wasn’t any harm in it." She had rented the hall to Edward Bowman for fifteen shillings. Bowman said that he took responsibility for the dance pointing out that dances were held in other places and he did not think that he was doing anything wrong.

It was a time of a major depression when many people in the community were unemployed and struggling to feed and cloth their families. Edward Bowman said , "I am out of work and have to do something." After Constable Gilding told him it was against the City of Chelsea’s by-laws Mrs Isbister advised Bowman to close up and refund people’s money "being the decent thing to do".

When Constable Gilding returned to the hall forty five minutes later the dance was still in progress. He found fifteen couples dancing so he informed Edward Bowman that the matter would be reported to the Council.

The matter was considered at a Council meeting on April 30, 1934 when a technical problem became apparent. There was a regulation that specified when dance halls could be open for business but no reference was made to either Good Friday or Christmas Day. This was regulation No 2. As the regulation stood, dance halls could be open on those days except when they fell on a Sunday. Dance halls could not open on Sundays. On July 23, 1930 an amendment was made by inserting a clause prohibiting the holding of dances in any registered dance hall, dance palais or saloon in the municipality of Chelsea on Good Friday. But the formal requirements to make this amendment operational had not been followed through correctly. Consequently, the Town Clerk indicated, "…the holding of the dance on Good Friday night is, on a technical point, not an offence."

The Council informed the police no action could be taken but a committee was to be appointed to consider the question of revising and, where necessary, altering the regulation.