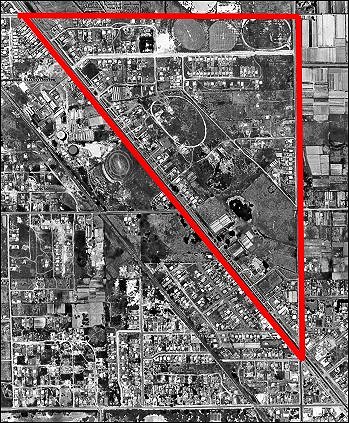 On July 14, 1852 Thomas Bell Darling purchased at auction in Melbourne one hundred sixty nine acres, two roods and nineteen perches of land known as Portion 42. The land, in the title certificate, was described as that section, "…bounded on the north by portion forty one bearing west fifty one chains forty links on the south west by a road three chains wide bearing south thirty eight degrees east eighty three chains eighty two links and on the east by a road one chain wide bearing north sixty six chains being the land put up to sale by auction as lot No 58." The three chain wide road referred to is Nepean Highway and the second road of one chain is Chesterville Road Cheltenham. Portion 42 started at the intersection of Nepean Highway and Chesterville Roads and went north in a triangular shape as far as Highett Road today.

The land was subdivided and at various times sections were sold. Many years later some of these sections were consolidated under one title to allow the construction of a home for children and, later still, a regional shopping centre. One consolidated section opposite May Street and stretching north to Bay Road was the site of the Methodist Children’s Home and subsequently a home for disadvantaged boys, conducted by the Roman Catholic religious order, the Hospitaller Brothers of St John of God. In 1964 the Myer Emporium company bought the buildings and twenty seven acres of land to establish a regional shopping centre. A section toward the north east corner is now the Waves Leisure Centre and the Turner Road Reserve.

Thomas Bell Darling paid a pound an acre for the land in 1852 and sold the one hundred and sixty acres in July 1856 to William F A Rucker for £3283-8-6. Darling assisted Rucker with the purchase by providing him with a loan of £2955-1-8d towards the total cost of the property. It was five and a half years later in February 1862 that the ownership of the property returned to Darling who then sold it in July 1864 to James Jamison. Jamison who arrived in the district in 1859 paid £1017-4-3d, a substantial difference to the sum Rucker paid for almost the same land eight years earlier, although on this occasion a twenty acre block of land on Point Nepean Road was excluded from the title. While Darling received a significantly smaller sum of money from Jamison, he still seems to have made a handsome financial profit on the deal, twelve years from the time of his original purchase.

Now owning a substantial parcel of land Jamison set about subdividing sections and selling them off. His first sale was a small piece of land at the intersection of Chesterville Road and Nepean Highway. This was sold to William Brown Treeby in July 1864 for forty pounds. A larger block further north on Nepean Highway and stretching through to Tennyson Street was sold for three hundred pounds on August 30, 1877 to William Henry Richard.

Sales continued in 1886, 1887 and 1888. Three blocks of land were sold and transferred to their new owners on September 4, 1886. One was to the Cheltenham Protestant Hall Company Limited. This company was formed by the Protestant Alliance Friendly Society, Loyal Cheltenham Lodge No 40. The hall that was built was subsequently called the Soldiers’ Memorial Hall and more recently Columns. The second block to the south of that sold to the Protestant Hall Company was sold to David Findlay Watson and the third transfer of title concerned two blocks of land north of what is today Jamison Street and what was to become part of the site of the Methodist Children’s Home. The new owner of this piece of land was Mary Jane Jamison, the wife of James. The same year, 1886, but two months later, saw the sale of one block of land on the corner of Jamison Street and Point Nepean Road to Derbin Willder, a sharebroker of Collins Street, West Melbourne and a second but much larger block to Mary Ann Elizabeth Jane Penny, "the wife of Ernest Richard Penny of Cheltenham Gentleman". Mary’s land was "ten acres two roods fourteen perches and seven tenths of a perch or thereabouts".

The remaining land on Portion 42 owned by Jamison was sold on January 24, 1888 to Thomas Bent and Benjamin Josman Fink, who held the land as tenants in common. Both were members of the Legislative Assembly in the Victorian Parliament at this time. In the same year that they made their purchase, they sold a section to Ellen Johnson, and two separate pieces of land to George Keys, William Keys and James Barley Sharp, one of which faced onto Jamison Street and became part of the Methodist Children’s Home

May 10, 1892 saw Thomas Bent and Benjamin Fink mortgaging the remainder of the land held by them to the Commercial Bank of Australia Limited. This was a time of depression, one of the worst in Australia’s history. Banks and financial institutions suspended payments to depositors desperate to withdraw their funds. Many banks closed down. In 1893 a whole week was declared a bank holiday in an effort to check the withdrawal of funds. Only two banks remained open on that occasion. Bent and Fink could not hold the land so the title was transferred to the bank. It was not until the early 1900’s that the Commercial Bank of Australia began to sell the land previously owned by Bent and Fink.

The Commercial Bank had itself been in trouble in the depression of the 1890’s. The evening newspapers of April 4, 1893 announced the news that the bank was suspending payments and would not open its doors the next morning. Cannon (1986:231) writes, "It financed too many suspect building societies. It accepted too high a ratio of deposits to capital and reserves, so that when a run occurred, a safe margin of cash was not available. It financed too many risky accounts of land speculators." A few days later the bank was reconstructed with the approval of the Victorian Supreme Court but remained in difficulties for some years.

The bank formed a Special Assets Trust Co Ltd, into which all the unrealized assets of the old bank were placed. These assets, mainly land, were gradually sold off. The sums realized were used to liquidate the bank’s £12 million in liabilities. After about thirty years this enormous sum was finally extinguished, and the bank’s position began to look healthier. (Cannon 1986:239)

One of the first sales of the Cheltenham land by the bank was a five acre block on Point Nepean Road to Peter John Matthiesson. Matthiesson paid a deposit of ten pounds on April 23, 1902 towards the total cost of £250. The conditions of the sale indicate that the balance of the money owing was to be paid within 60 months of the date of purchase and that interest was to be paid "to the vendor on the 23rd days of October and April in each year whilst any money is owning hereunder. Interest on the balance of purchase money for the time being owning at the rate of (£5) five pounds per hundred per annum." The title of the land was transferred to Matthiesson on May 30, 1907.

Samuel Woof gained the title to his land on Chesterville Road on February 19, 1903. It was more than two years later, before the next transfer of land occurred. The individuals named on the Certificate of Title were Albert Thomas Holden, Robert Philp, Jonathan Peter McCann, James Jamison, George Sweet, Benjamin Dawborn and Frederick John Cato. This land was later to become part of the Methodist Children’s Home property. George Ekins Gulliver a chemist, famed for his invention of Laxettes purchased eleven acres on the southern corner of Chesterville and Tennyson roads which was in almost sixty years time to become part of the Southland. shopping complex. Other people purchasing the Bent and Fink land were Thomas James Dyson, Henry Sullivan, John Gilpin, William Henry Sisson and Robert Alexander Davie. The last transfer of title occurred on October 22, 1919.