Batavia Java, 1945. A group of Australian and British Troops until recently Prisoners of War. The Australians in this group are members of ‘Black Force’.

It was the 1940s and Australia was at war. At 537 Beach Road, Mordialloc, Mrs Beatrice Ella Hackwell heard that her husband, Private Frederick William Hackwell, was alive and well but a prisoner of the Japanese. Imagine the tremendous relief and joy she was feeling.

She had received the news from a Mrs M Fredrickson who heard it while listening to a shortwave broadcast of messages from prisoners of war on Radio Djakarta Java. Frank's message to Ella was:

Dear Ella,
I received Radiogram. I am thrilled about June. How is Mum and Doug I have not heard for 2 years. I am worried.
Frank. 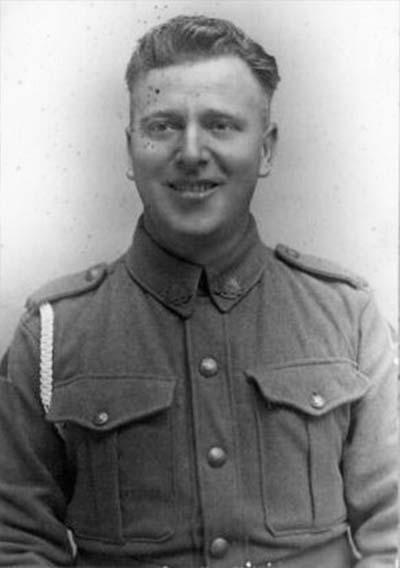 As a thirty-nine-year-old married man with a child, Frank enlisted on 27 July 1940, joining the 2/3rd Machine Gun Battalion. He sailed with the battalion for the Middle East on 2 October 1941 after training at various places in Victoria including Ballarat, Puckapunyal, and Geelong. In Palestine and Syria the battalion was fighting against the Vichy French when the Australian Government ordered their return. 1

They embarked at Suez on 31 January 1942 and disembarked at Batavia (now Jakarta) eighteen days later. The nature of the return plan had changed. They were to assist the Dutch troops facing Japanese forces who were advancing rapidly through the Netherland East Indies. The Australian troops, known as the Black Force, made a brave stand at Palembang but were ordered to surrender on 9 March 1942. Thus commenced three and a half years of captivity where the Black Force members were forced to endure brutal conditions; they were over worked in labour camps, inadequately provided for, and casualties were high. 2

Lieutenant Thomas, the officer engaged with army records, sent a message to Ella Hackwell which had been heard over short wave from Batavia in July 1943:

Dear Ella, June, Mum, Dad and all. This is one of the happiest and most pleasant moments to be allowed to write home Gee! How I've been looking forward to the opportunity to let you all know that I am safe and well. I wanted you to know that we are well treated so please honey all you have to do is to look after yourself and see that the rest of you all do the same as I want you all in the pink for my return. But darling it should not be long now before all this strife is over. See that you never get down hearted Ella, all I want is for you to be the same as when I left you, then I can stick this out O.K.

Lieutenant Thomas added a final paragraph to the letter:

I have to inform you that the attached letter, alleged by the Japanese to have been written by VX38404, Pte. F W Hackwell, was read by an announcer from a Batavia Broadcasting Station, a part of an enemy propaganda programme. The information is conveyed to you with the warning that, in view of the nature of its receipt and that it emanates from an enemy source, it should be accapted (sic) with the reservation that even if the letter is partly authentic, part of it may have been added to or taken away to suit the purpose of the Japanese propagandists. 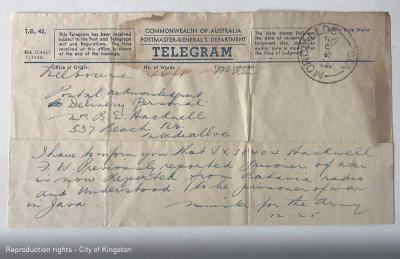 Telegram from Minister for Army to Mrs B Hackwell.
Collection:
Kingston Collection, City of Kingston

On 20 April 1944, another message was received from Private Frederick Hackwell. Mrs Long of Ballarat was listening to the broadcast of a Japanese station in Java when she heard a letter from Fred read by a female announcer who spoke very quickly making it very difficult to record every word. Initially, Fred asked questions about the family and addressed the letter to Ella, his wife, and Jim (sic). Later some of this information proved to be incorrect.

.... Now Honey I am going to tell you about myself ‐ I am quite well & work in the garden & get paid for same ever yours.

It was seventeen months later, 17 September 1945, when Ella Hackwell received a telegram from the Minister for the Army informing her that her husband, previously reported as a prisoner of war, was more recently reported from Batavia radio to be a prisoner in Java. Ten days later another telegram was received from Army Records that Private Hackwell had ‘emplaned (sic) Batavia for Australia on 21 September’. The good news was quickly communicated to Ella's friends and relatives, generating a flood of congratulatory telegrams from St Kilda, Warragul, Deniliquin and Glenhuntly. 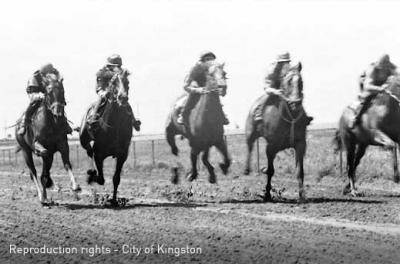 The Lieutenant Colonel in charge of military records in Victoria wrote on 10 October informing Ella that her husband had been recovered from enemy hands and was returning from Singapore on a hospital ship, the AHS Manunda. He said she would be advised of the date of Frank's arrival in Melbourne but warned because of the difficulty of accommodating many visitors wishing to welcome home troops, authorisation would be given to no more than two individuals to enter the Reception Centre. Those living more than twenty miles from the Centre would be issued with one first class return rail passage to Melbourne. Notice of available assistance to Next of Kin from the Australian Red Cross Society was also given.

Fred Hackwell was discharged from the Australian Army on 5 February 1946 after serving sixty-three months. He was awarded the 1939-45 Star, the Pacific Star, the War Medal and the Australian Service Medal.

Returning to his wife and daughter in Mordialloc he re-entered the workforce. By the late 1950s and early 1960s, while living at 43 Railway Place in Newmaket, Fred worked as a steward. Later, according to census records in 1967 he continued his role of steward but had moved to 19 Ashmore Ave in Mordialloc. This suggests that he worked as a steward at Flemington Racecourse and Epsom Racecourse in Mordialloc. Fred died on 28 May 1984 at Albury in New South Wales.

The documentation on which this story is based was provided by Douglas Hunter, Manager of the Light Horse Museum, Bandiana.  His assistance is gratefully acknowledged.