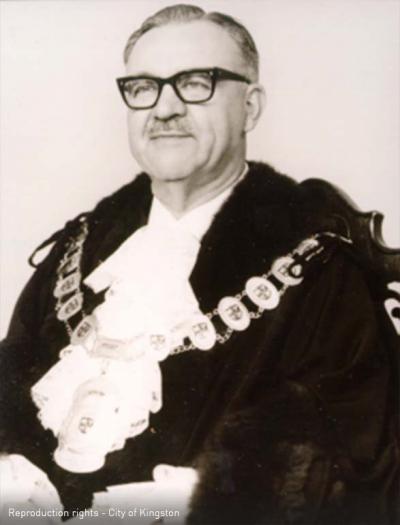 Bill Fry (as he preferred to be called) is well known to a large number of past pupils and staff of Cheltenham State School No. 84 and to residents of Cheltenham, Moorabbin and Beaumaris due to his wide involvement in local associations and Municipal affairs and his term as member of the Legislative Council for Higginbotham province from 1967 to 1979.

Bill spent his early years in Ballarat. In his school years Bill distinguished himself in athletics, scholarship and leadership. At Melbourne Teachers' College he was notable for his debating skill. Appointments to Williamstown High School then Hattah in the Mallee followed. His marriage to Gwen, also a teacher, in 1935 was followed by three boys, Barry, Doug and Ian ‐ at this time the family had returned to Ballarat.

Bill joined the Citizen Military Forces in 1927 and in 1938 received a commission while serving with the 47th Battalion. He took a demotion from Major to Captain to have the opportunity to serve in New Guinea. He served with the 9th Battalion in New Guinea and the Solomon Islands, again as a Major, and here was mentioned in despatches. He was promoted to Lieutenant Colonel and commanded the 47th Battalion. After hostilities ceased, he headed a Commission investigating war crimes in the Pacific Theatre. Like many of his troops, he suffered ill health, some illness never being completely cured. He spoke little about the trauma of war experience ‐ even to his family.

His teaching service spanned 40 years. After the war he taught at Camperdown for 10 years and while there Bill was heavily involved with the Rotary, Masonic Lodge, Liberal Party, Golf Club, Tennis Club, Presbyterian Church and other organizations.

The family then moved to Melbourne in 1954 and settled at Beaumaris. Bill was headmaster of the new Cheltenham East Primary School. He then moved to No. 84. As always, Bill was heavily involved in community affairs, joining the RSL, Lodge, Rotary, Church, Cheltenham Golf Club and Bowling Club. He was elected as Councillor on the Moorabbin Council in 1963 and was Mayor 1968‐1969.

In 1967 Bill entered State Parliament where he served as Chairman of the Education Committee and also the all party Road Safety Committee. This Committee was responsible for the introduction of compulsory Seat Belt legislation and upper speed limits. He was president of the Victorian Legislative Council in 1976. After retirement from parliament at age 70 he received a knighthood. He wife Gwen pre-deceased him in 1993. He continued his involvement in community affairs for as long as he was able. Many past pupils had the opportunity to meet Bill at the school's 140th birthday celebration. His mobility was limited but his joy in meeting so many old friends and past pupils was obvious.

In conclusion, a quotation from Mr Murray Thompson's address to Parliament:

In a number of ways Sir William was an Australian Everyman ‐ he served Australia in World War; he was a teacher at both primary and secondary school levels; and he worked both as a Local Government councillor and as a Member of Parliament. 1