Every so often the action of the tides exposes the remains of a small structure in the sand at Mentone beach, just east of the stone shed below the Mentone hotel. 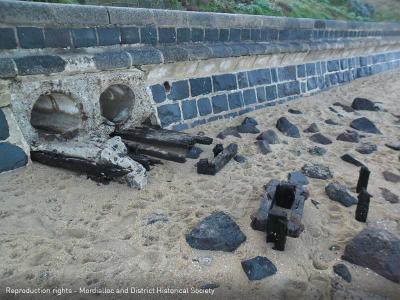 Every few years the tide washes away almost a metre of sand at this point to expose the remains, and they were visible in mid-2016 when these photos were taken. The tide soon covers them again with sand each time.

I was curious to know what these are the remains of. I had thought they may be the remains of a small rail track, perhaps used to launch small boats or to load/unload supplies, possibly serving the hotel and the baths.

However, while there is a small gauge railway to the right of the 1929 aerial photo that runs from a large boatshed (I have not seen any remains of that railway in recent years) the explanation has become clear from an old postcard photo of the baths. 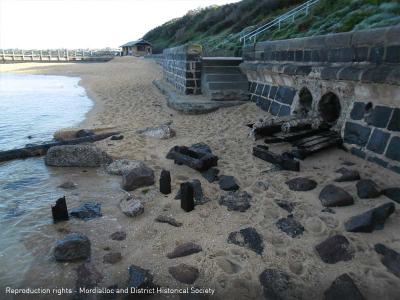 The postcard below clearly shows that the structure running diagonally across the beach is a large drain pipe, presumably the main drain from Mentone Parade and the Mentone village. As well as the postcard view, both the pipe and the rail track are visible in the 1929 aerial photo above of the baths. The aerial photo was obviously taken before the sea wall and promenade were built in the mid-1930s. It appears that at that time, the pipe was expanded into two pipes, cut off short and concreted over when the wall was constructed, the twin concrete pipes now passing under the promenade to the beach.

All that remains of the drain pipe is some wooden stirrups that once supported it, and these are revealed only rarely at the whim of the tide.

If any residents remember seeing these remains in earlier times, we would love to hear from you. 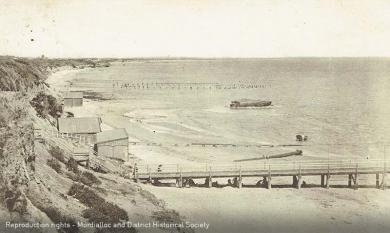 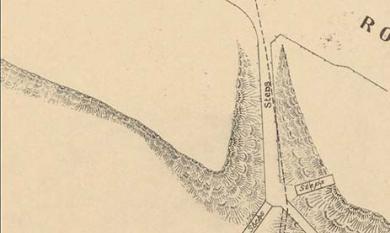