Certificate of thanks signed by office bearers of the Unemployed Association, committee members and other individuals in the community presented to Mrs Mason. 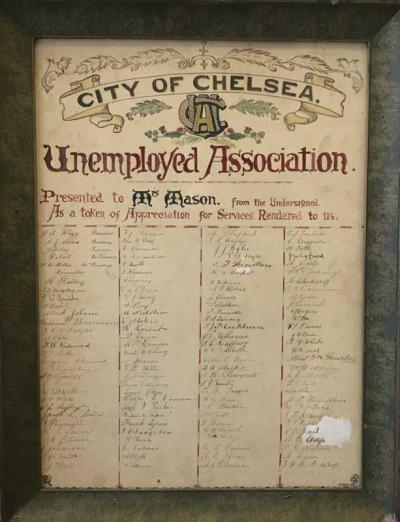 Certificate of thanks signed by office bearers of the Unemployed Association, committee members and other individuals in the community presented to Mrs Mason.

Unemployment affected many families in the Chelsea municipality in the late 1920s and early 1930s. The State Government passed several acts to authorise certain actions to provide relief. A sustenance scheme was one. Relief committees of volunteers were established throughout Victoria to manage the action.

Mrs Mason was a significant volunteer working in Chelsea. She and her husband were contributors to the community in a variety of ways, not only in unemployment relief. They built the Mason Theatre in 1923 which with seats removed became the place for dances, annual balls and events to raise money for community needs. In 1925 silent movies were held there. The theatre was an important community asset.

In recognition of Mrs Mason's help to the unemployed, she was presented with a ‘certificate of thanks’ signed by office bearers of the Unemployed Association, committee member and other individuals in the community who appreciated her assistance.