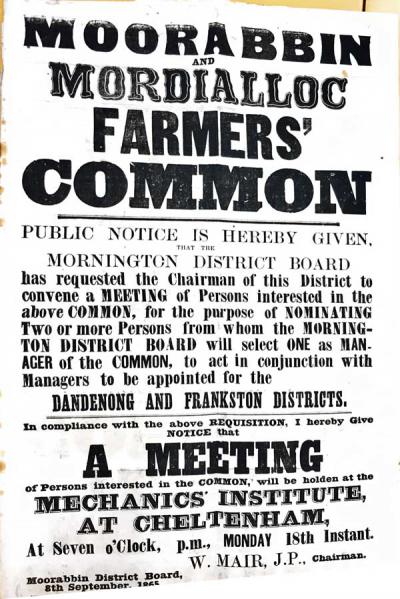 On the establishment of the State of Victoria in 1851 the new government withdrew leasing rights of families squatting on thousands of acres of land, and began to survey it, dividing it into portions to be offered for sale through land auctions. Pre-emptive rights were given to squatters allowing them to claim hundreds of acres around their homestead before the remaining land was put up for auction.

After the sale of land, the purchasers could petition the Governor-in-Council to set aside ‘common land’ for their use. Some conditions applied. The petition had to be from no less than ten occupiers holding not less than 500 acres of adjacent purchased land. The crown land to be proclaimed a common had to be within five miles of purchased land. This common land was to be called a Farmers' Common. 1

Initially, in February 1861, about 4960 acres of land in Mordialloc and District was declared a Farmers' Common but later, in one month, that proclamation was recalled and a new one announced. 2 About 7960 acres was proclaimed the Moorabbin and Mordialloc Farmers' Common. The land was described as:

Commencing at the south west angle of allotment 58 parish of Eumemmerring; bounded on the south by a line bearing west about three miles 30 chains to the shore of Port Phillip Bay; on the west by the shore bearing northerly to the south-west angle of the Aboriginal Reserve, then including the Aboriginal Reserve; on the north by alienated lands in the Parishes of Mordialloc and Dandenong, and by the Dandenong Creek bearing westerly to the north-west angle of allotment 60, parish of Eumemmerring; and on the east by allotments 60, 59 and 58 bearing southerly to commencing point. 3 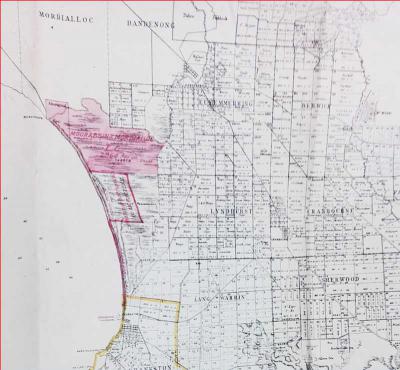 On 13 August 1862 a public meeting was held at the Armagh Hotel (later called the Royal Oak Hotel) in Cheltenham to elect the managers of the Moorabbin-Mordialloc Farmers' Common. Three joint managers of the Common were required. Each parish bordering the Common (Dandenong, Moorabbin and Mornington, was to nominate a manager). 4 William Francis, the chairman of the Cheltenham meeting, informed the Board of Land and Works that Isaac Keys was elected from the Dandenong parish, John Potts elected from the Moorabbin Parish and I Browning of Mordialloc elected for the Mornington Parish. He submitted their names for the Board's approval. 5

In December 1862, several months after the creation of the Common, a number of people were complaining about the way the Common was being managed. One writer claimed there was ‘jobbery at work’, that is, corruption among public officials making private profit out of a public job. Attention was focused on one manager, Issacs Keys, a member of a family that had held thousands of acres of land as squatters. With the surrender of this land the Keys family became owner of hundreds of acres through purchase at land auctions. 6

‘Mordialloc Farmer’ writing to the editor of The Herald reported that the managers of the Common had circulated notices throughout the district warning that people trespassing on the Common faced penalties. Those who wanted to be licenced to graze their stock legitimately on the Common were required to pay one shilling for each beast and two shillings for each horse each month, paid quarterly in advance. The correspondent went on to protest about the fencing, previously erected by families squatting on the land, which prevented access to the Common by those paying for licences. Furthermore, the correspondent claimed that the family of one of the managers should either remove its trespassing stock or muster it to the care of the Common's herdsman and pay their grazing fees quarterly in advance. He went on to accuse this ‘good manager’ of working in the interests of his family

‘to secure an uninterrupted monopoly of this large tract of grazing country’. 7 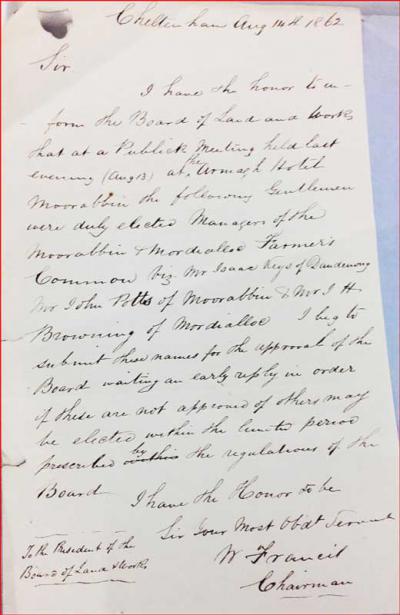 Letter to Board of Lands and Works – Election of Managers Moorabbin Mordialloc Farmers’ Common.
Courtesy:
Public Records Office of Victoria

The accusation was that the Common and adjacent unenclosed lands were swarming in every direction with cattle and horses owned by the family of the ‘good manager’, for which no licence of assessment has been paid for some years. In response, the managers of the Common and Thomas Penny on behalf of Isaacs Keys, signed a letter to the Board of Land and Works stating that while there had been 200 head on the common there were at that time only 141. The letter, as was the custom, endorsed

We have the honour to be, gentlemen, your ob' ser' (obedient servant). 8

On 9 May 1864 a public meeting, chaired by Thomas Attenborough and held in the Cheltenham Mechanics' Hall, was attended by 58 residents from the parishes of Moorabbin and Mordialloc. (Cheltenham, Mordialloc, Spring Grove, Moorabbin, Beaumaris and New Brighton). They requested that the President of the Board of Land and Works remove two managers of the Common and receive a deputation of five of their number to present the case. They sought the removal of Isaac Keys and Solomon West.

There were several issues raised at the Cheltenham meeting including an irregularity being committed by the managers in voting money towards the maintenance of Lower Dandenong Road, an important road leading to the Common; members of the Keys family were de-pasturing 190 head of cattle and 79 horses on the common but paying fees only for 35 head; diseased cattle of the Keys family remained on the Common to the detriment of those of the general public; and the ineligibility of Mr Solomon West to be a manager because he lived more than six miles from the Common.

The managers disputed these accusations and protested that the residents had no right to make such claims. 9 The response of the President of the Board of Land and Works to the complaints of residents and the replies of two managers was to establish a board of enquiry to examine the alleged mismanagement of the Common. Both Mr Templeton, the Police Magistrate of Brighton and Colonel Mair of the Moorabbin District Road Board agreed to accept the President's invitation to act as the board of enquiry, with Mair acting as chairman. 10 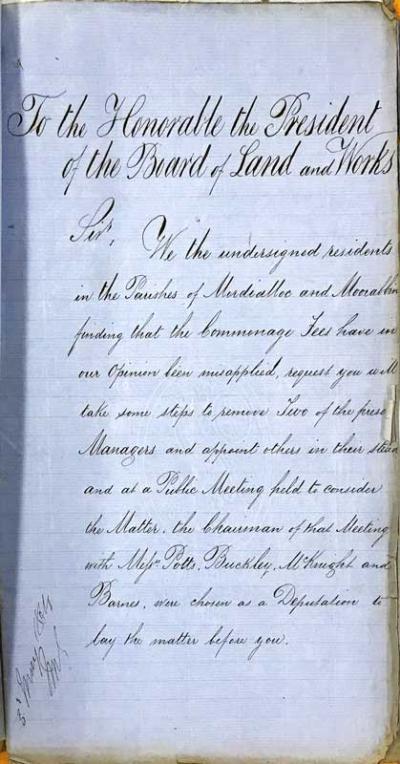 Letter from Thomas Attenborough to President of the Board of Land and Works.
Courtesy:
Public Records Office of Victoria

Witnesses to the enquiry presented their views about the issues brought forward from the Cheltenham meeting. Isaac Keys acknowledged that a surplus credit of £15+ in the Common's funds was handed over to the Moorabbin District Road Board to spend on Lower Dandenong Road. This road was the nearest important road to the Common and a large portion of the fees collected were paid for Common rights by people living in the locality. John Potts stated that he had counted 79 horses on the Common and the majority belonged to Isaac Keys. There had been a verbal agreement that Mr Keys could run 25 horses in return for Commons cattle running on his unfenced land. He went on to say that he had not seen diseased cattle on the Common, except one which was removed. Mr Solomon West believed he did not reside more than five miles from the Common as alleged, while Mr Parker stated his opinion that all managers ought to reside within the same limits as required of people seeking entitlement to de-pasture their cattle. 11

On 2 May 1865 two managers of the Moorabbin-Mordialloc Common wrote to the Commissioners informing them that as members of District Boards they were disqualified from acting as managers of the Farmers Common and confirmed their resignations from the role. Solomon West was elected to the Moorabbin District Road Board from 1862‐1865 and again in 1866‐1869, while Isaac Keys was a member of the Dandenong Road Board from 1862‐1865. 12 In their place John Keys of Dandenong and John West of Moorabbin were each elected to fill the vacant management roles. One month later, Joseph Ostler, the District Clerk of the Moorabbin District Road Board informed the Board of Land and Works of the nomination of John Keys and John West to fill the two vacant roles. 13 John Keys was informed by the Moorabbin Road Board of his successful appointment but later in the month of June he wrote to the Board of Land and Works because he had heard that it did not approve of his nomination. He said, if this rumour was correct, he had been acting under the authority of the Moorabbin District Road Board. Subsequently, a meeting of members of the Common called by the Boards of Dandenong and Moorabbin was held and John Potts was elected manager. This appointment was sanctioned and gazetted so the affairs of the Moorabbin-Mordialloc Farmers' Common continued to be managed and function. 14