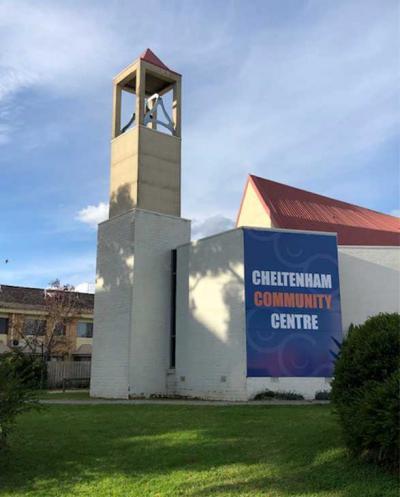 New Community Centre and Centre of Worship for the South Cross Community Church, 2021.

In 2021 the Cheltenham Community Centre (CCC) is celebrating 35 years of continuous service in the local community. The Centre was established by members of what was then called the Cheltenham Church of Christ (now the Southern Community Church of Christ) itself a significant part of the Cheltenham scene dating back to the late 1850s. Housed in the former home of the Judd family in Chesterville Road the Centre was first called the Cheltenham Community House. It was officially opened on 27 February 1986 by Cr Duckmanton, then Mayor of Moorabbin, as a place for members of the local community to get together, enjoy an open-door friendship atmosphere, mutual support, and learn new skills. The centre became one of an expanding number of neighbourhood houses across Melbourne.

With the efforts of large number of committee volunteer tutors and supporters the program quickly extended to offer activities like craft skills, first aid, music-for-tots, understanding computers, and relaxation. As it grew, the centre included classes in English for Migrants, play groups for children, aerobics, managing money, parent effectiveness, tennis coaching, and others previously run by the church or suggested by people already attending the centre. The range of activities varied over the years but was always based on what local people felt was needed.

With its expansion the centre became an autonomously incorporated organisation in 1992 but retained a partnership relationship with the church. When the old ‘red-brick house’ was to be demolished and a new worship centre built for the church in 1997, the centre was offered accommodation in the new facility and some of the older buildings on a low rental basis, an arrangement that has continued since.

From its earliest days when around 500 people in a year took part in activities, Cheltenham Community Centre has grown to having more than 1200 people accessing its services each week. It has become a highly recognised location for nationally accredited courses, childcare, holiday and sporting activities, recreation, support and personal development. During the 2020 COVID pandemic the centre transferred many of its activities to online and kept contact with housebound, vulnerable people in the area through a home delivery of meals and regular newsletters.

CCC has maintained its connections with the local community encouraging volunteers to participate with staff in many aspects of its work. The contribution of the dozens of volunteers was illustrated by the centre's 2021 AGM when three long serving volunteers were awarded inaugural Life Memberships. The centre's work was praised publicly by local Kingston councillor, Cr Jenna Davey-Burns.