For lovers and players of Australian Rules Football the League's Grand Final is a magnificent event in late September. Until 2020 it was the climax of many weeks during which teams competed for the right to play in the final clash of the season at the Melbourne Cricket Ground (MCG). Winning a premiership cup is considered by clubs, teams and supporters as a truly historic event.

More than 2 million people across Australia watch the tussle on television while individuals in many countries around the world ‘tune in’ to watch it live. In contrast local premiership finals are less grand occasions but teams still draw the loyalty and support of local people and inspire local poets to contribute ‘bush verse’ to their local newspaper. Here is an example from 1915, the name of the poet is unknown.

Who Will be Premiers?

With contrite apologies to Rudyard Kipling and ‘The Absent-Minded Beggar’.

When you've shouted ‘Buck in Brighton, Moorabbin and the rest;
When you've finished praising Cheltenham to the sky;
Could you kindly spare a moment for the team I think the best.
And who on the premiership have got an eye.
Folks say they are only gardeners but They're sportsmen good and true,
And when they are wanted most That's when you'll find them.
Whether on or off the field they're Conduct's all right too;
And they never leave a blemished name behind them.

Tall boys, small boy boys from the city and town,
Forty or fifty-more or less assembling every day,
Each of them doing his little little bit, upholding his club renown.
They're on the ball, one and all, singing play, play, play.

Some promised they would play with us, then played elsewhere (they're strong),
And ‘absent-minded beggars’ we often find them.
But l've no time to argue in the middle of my song;
We can easily fill the gap they leave behind them.

So, hurry along, sing this song, it is for you and I,
Play the ball (not the man), heed your captain's cry.
Hurry up, hurry up, no time for Delay;
Victory won, sure as a gun, so play, play, play.

Now Finance is our drawback, and I'm very much afraid.
That our football club may soon be ‘up the spout,’
If our ‘absent-minded patrons’ do not kindly ‘play the game,’
And their donations quietly shell out.
But I'm sure they won't desert us in our time of stress and need,
And thought that these few lines might just remind them.
That a football club can't ‘carry on’ without the £ s d.,
So, to their promises we must now bind them.

Large cheques, small cheques, silver, copper or gold;
Anything in ‘the shape of cash’ ‐ we are not proud you see;
Bank notes, or postal notes, ‘pray Don't think me bold’;
Just address the Hon Sec,

Cheltenham playing Murrumbeena in the semi-final was victorious but failed in the words of the poet, to ‘play the ball not the man’. The reporter from the Brighton Southern Cross commented on the one-sided nature of the game and the rough play displayed. 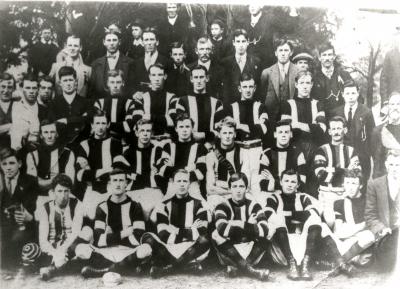 The martial spirit of the times affected the play of footballers last Saturday, for in the League and Associations games rough play predominated. At the semi-final match of the Federal Association, played at Brighton Beach between Cheltenham and Murrumbeena, during the second half, when the latter were attacking, Cheltenham assumed the aggressive, three or four players being especially prominent. The latter appeared to be anxious to demonstrate their skill as boxers, but to others, who were playing in a friendly spirit, intervened, and prevented the game deteriorating into a melee. The field umpire witnessed these occurrences, but beyond stopping the game on one occasion was powerless. … The game was unduly protracted through the lengthy interval at half-time, which arose through an argument about the ball. The practice of the Association is for the competing teams to provide a ball each, one being used for the first half, and the other for the second. The Cheltenham captain objected to the state of the Murrumbeena ball at the opening of the third quarter, but refused to permit use of his club's ball being used unless half the cost ‐ 7/6 was paid. This was not acceptable to the other team, and eventually the play was resumed with the Murrumbeena ball. Welch had charge as central umpire, but his interpretation of rules was peculiar. 2