Outdoor area at the rear of Highett Preschool, 2010s.

In 2019 the last kindergarten session was held at Highett Preschool, and the building was decommissioned. For generations of local families, over the course of 64 years, the preschool at 3 Station Street Highett had provided a place for learning and connecting with others. Let us look at some of the stories about this special place, and the people connected to it. 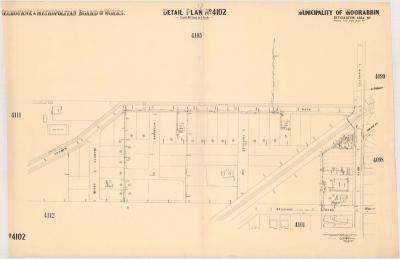 Melbourne and Metropolitan Board of Works, Detail Plan No. 4102, 1938, lithograph.

In this 1938 lithograph we see a portion of Highett on the eve of World War II. Although land had been subdivided, there were only a handful of shops in Highett Road and few residences in the area.

After the war, Highett experienced an expansion in population and home building. By November 1947 a kindergarten committee was formed in the local area, and it was one of the community organisations that helped build a hall for the Highett branch of the Returned Services League (RSL) in Worthing Street. It was this hall in Worthing Street which was also used as Highett's first kindergarten (as preschools have also been called):

Sixty Highett returned soldiers, aided by Boy Scouts and members of the local Citizens' Association, set Melbourne an object lesson in building today. Before breakfast today they began laying foundations for their new … hall which they hoped to have completed and in use in less than 12 hours.
“… Scouts, put on shifting dirt and stacking timber, and members of the kindergarten committee, also lent a hand. They will use the hall when it is completed.” 1 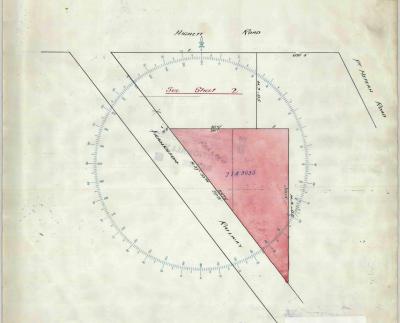 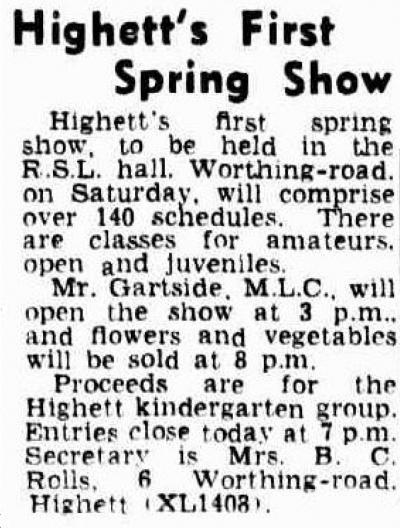 In 1947 Moorabbin Council discussed the establishment of a kindergarten and baby health centre at Highett.2 On 28 June 1948, the council bought land next to the railway line in Highett for the baby health centre and kindergarten, selling a southern portion of the allotment in 1960, where the Highett RSL eventually relocated to.

A 1949 newspaper advertisement for a "Full or part-time Assistant for Highett Pre-school Group" indicates that preschool services were up and running in the area, and in 1950 councillors were discussing "kindergarten classes being held in the pavilion at Highett recreation reserve." 3 Fundraising for the kindergarten was a major activity undertaken by the Highett kindergarten group, as reported in a 1952 newspaper article.

The City of Moorabbin submitted their designs and specifications for the Highett Infant Welfare Centre in 1951, and the Pre-School Centre in 1954. As we can see in the locality plan section of the architectural drawing below, the preschool building was located next to the Infant Health Centre (which had been approved for opening by the Department of Health in March 1952). The locality plan also shows there was a playground at the rear of the centre. 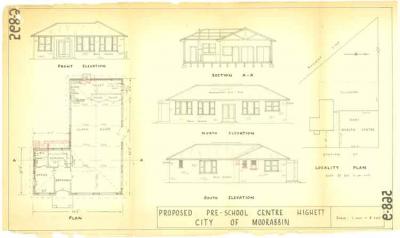 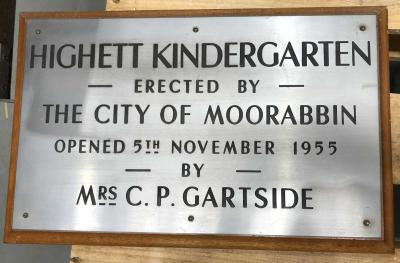 The Highett kindergarten was built by the City of Moorabbin and officially opened on 5 November 1955 by Mrs C.P. Gartside, the wife of the local member of the Legislative Council. 4 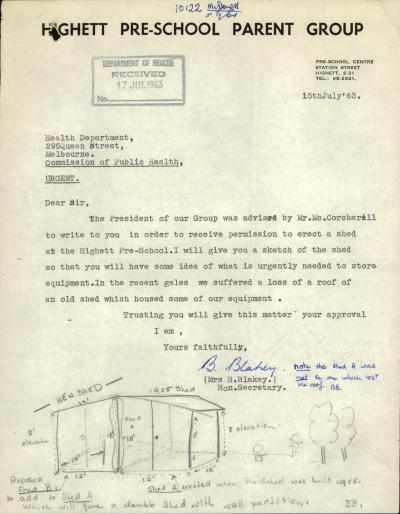 Over the years, the Highett Pre-School Parent Group, which was the preschool's committee of management, raised funds and corresponded with authorities to modify the building and add facilities such as heating, ceiling fans and flooring. One of their early campaigns was for additional storage at the centre. 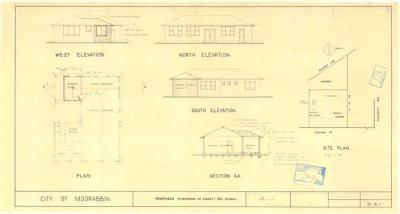 In a 1963 letter, the committee sought approval from the Department of Health for a shed. The letter features a delightful sketch of the current and proposed shed, complete with trees, and children at play.

In 1977 plans and specifications were submitted to the Department of Health for a new storeroom at the rear of the building. Although approved in September 1977, the project did not immediately proceed. Five years later, and after much correspondence, the plans were reapproved on 19 November 1982. The main cost of adding the storeroom was $4,760, to which the City of Moorabbin and the Highett Pre-School Parent Group each contributed half. 5

Another change to the preschool included improvements to the sandpit in 1987, which was the "major objective" for its committee of management that year. According to the president and secretary's report at the 1987 annual general meeting, the

total cost of the sandpit was $1,765, $500 of which was donated by East Sandringham Boys Club Inc. …       Mr Prince [the vice president] thanked all who had helped the Pre-School to function well in 1987, and sent particular thanks to Mrs. Julie Priest [the preschool director] and Mrs. Mary Hunt [the preschool assistant] for their untiring efforts with the children.” 6

At the meeting, Julie Priest acknowledged the ongoing support from the City of Moorabbin, both financially and in kind, particularly through the work of council gardener Leanne Mills, who maintained the garden and grounds. In 1987, 50 children had enrolled at the kindergarten. Their attendance fee was $30 to cover the cost of materials.7

The kindergarten in operation

So what was it like to work and learn at Highett preschool? In her report to the 1987 annual general meeting, Julie Priest outlined some of the principles underlying the teachers' approach to the kindergarten program:

… The first of these is the concept of ‘play’. In a kindergarten, learning is promoted largely through play, supported by a variety of materials and experiences under the guidance of teachers. Through play children are able to explore, create, solve problems, play out fears/anxieties, practise fine and large motor skills, share ideas and generally develop the social, physical, emotional and intellectual skills they will require as they grow up.
“A second concept that lies at the heart of our programme is that all children learn more successfully by doing rather than by being instructed. Children should be active participants."
“A third concept … is the fact that all children are individuals who develop at their own pace and in their own specific ways.” 8

Amanda Jones, who was the preschool director from 1988 to 1993, remembers the strong sense of community she encountered at Highett: "Everybody knew who you were in Highett. It was very much like a little town in the country." The preschool's location in Station Street, between the RSL and the Maternal and Child Health Centre, and with the library at the back, enabled regular informal communication and neighbourliness between the organisations. Amanda also remembers the support the preschool teachers received from the Council Preschool Adviser, Gillian Allen, who visited all the preschools in the City of Moorabbin.

Amanda worked with Mary Hunt, an experienced preschool assistant. As well as running classes, Amanda and Mary would take children on excursions, and there were regular visits to the preschool from a doctor who would check hearing, speech and general health. Amanda remembers challenging and rewarding times as a young professional dealing with large numbers of children and families. On a typical day they would:

Open the door at 9 o'clock, the session would finish at 11.30, and you'd pop out for a bit of lunch. The afternoon was a 1 o'clock till 3.30 session. You'd have parents on duty, who'd prepare the children's milk and fruit. On a Wednesday and Friday there'd be only one group, so you'd have planning in the afternoon after that."
“… I was only 20 when I came out from Uni. This was my first job. Lucky I had Mary.” 9 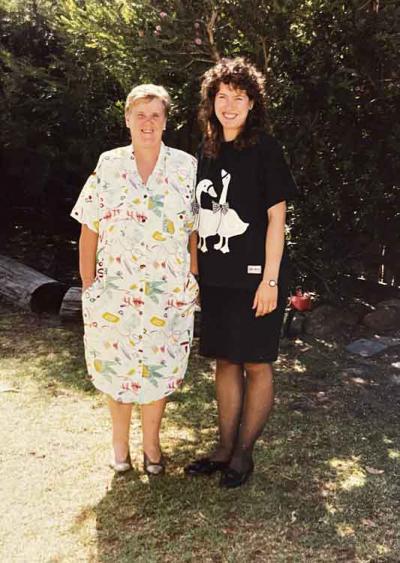 Mary worked at Highett Preschool from 1983 to 2016, and was renowned in the local community as a wise and caring teacher. In recognition of her service to the community, a bench with a commemorative plaque was placed in her honour at the front of the preschool. 10 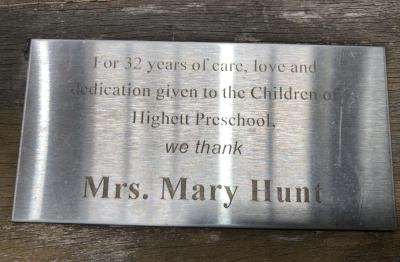 In the 2000s, the preschool changed its governance model and was managed by Early Childhood Management Services, and then TRY Children's Services, with input from a parent advisory group. One of the preschool's recent projects was the creation of a "forest-like playground" in its front grounds, with new play equipment and indigenous plantings. As well as receiving financial support from the City of Kingston, the project was assisted by members of the community who raised funds and helped establish the playground at a working bee. The last teacher at the preschool was Kate Smith, and the last president of the parent advisory group was Rebecca Madill. 11

These are just some of the stories from Highett Preschool, a place we farewell with many fond memories of friendships, learning and care. With its origins in the post-war growth of Highett and with the support of the local council, the preschool opened its own dedicated building at 3 Station Street in 1955. Over the next 64 years, the preschool provided a space for learning, and a community for generations of children, their families, teachers, and local organisations; all happening in the heart of Highett.