The March of Progress

The opening of a local court house in Chelsea on 4 February 1929 was a triumph for the local Borough of Carrum councillors who had campaigned for a dedicated building for many years. Prior to its relocation to a purpose-built facility, the Chelsea court had conducted its business at the Chelsea Picture Theatre since 1923, under trying circumstances as reported in the Age:

More difficult conditions than those under which the court business is at present conducted it would be difficult to imagine. The bench is situated on the stage, the legal profession occupy front seats in the stalls, witnesses use a side stairway leading to the stage, the defendants stand on the floor below the footlights, and the press is left to make the best arrangements it can at the side of the hall. 1

This hand-coloured photograph of the Chelsea Court House appeared in the 1938 publication, City of Chelsea: the City of Beautiful Beaches. The court house, along with other civic institutions like schools, sporting facilities, post offices, a Soldiers' Memorial Hall and an Infant Welfare Centre, were featured in the booklet as evidence of a municipality well advanced on its ‘march of progress’.

The growth of the City of Chelsea may truly be described as phenomenal. Twenty years ago the area (3040 acres) which comprises the municipality … was nothing but a strip of ti-tree six miles long by three-quarters of a mile in width, dotted over with a few permanent residences and a fair number of week-end camps, the resident population at that time being approximately 250. At the present time the municipality includes the townships of Carrum, Bonbeach, Chelsea, Edithvale and Aspendale, with a total resident population of 8000. 2 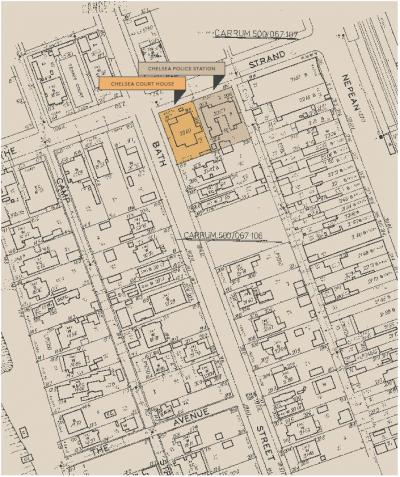 By 1950 the Chelsea council had successfully lobbied to relocate the Chelsea Police Station from ‘over half a mile away … hidden among the ti-tree’ to a more central site on The Strand, next door to the court house. The two buildings functioned as a justice precinct until the court ceased operation in 1985, the police station continuing on site until 1991.

The court house was purchased by the City of Chelsea in 1992 and became the headquarters of the Chelsea and District Historical Society soon after in 1993. The Chelsea Police Station and Chelsea Court House in their suburban setting can be seen in this 1980s photograph and mid-century Melbourne and Metropolitan Board of Works plan.

The Chelsea Court House was listed on the State Heritage Register in 1990 for its architectural and historic significance as an outstanding example of a suburban court house of its era, designed in a sophisticated neo-classical style, and as an important community landmark.

The records of the Public Works Department of the Victorian Government provide a window into the design and construction of the court house.

The design of the building, depicted in these 1928 hand rendered and coloured drawings, was supervised by department's Chief Architect Evan Smith. The small site plan located at the centre bottom of the plan shows lawn around the court house and land to the east set aside for a police station. These drawings were used to guide the recent restoration works undertaken by the City of Kingston. The blue stamp above the plan's elegantly lettered title contains the signature of the builder R.H. Neville, and the date 21 July 1928, which was when he was awarded the contract to build the court house. The contract book records the eight progress payments Neville received from the Public Works Department between August 1927 and May 1928. The total cost of the building was £3,883. 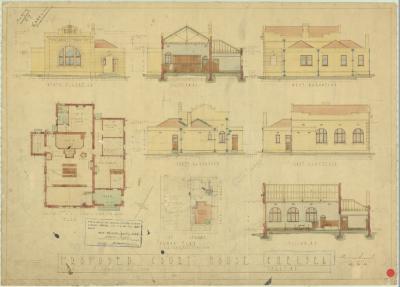 The Chelsea Court House played a significant role in the lives of countless local citizens who accessed its legal remedies or were brought to appear there. For some people, their encounters with the court enabled them to get on with their lives. For others, it was an experience involving tragedy or suffering. The court house was also a workplace for magistrates, clerks, police officers, lawyers and reporters.

The Chelsea court heard cases from different jurisdictions of the Magistrates' Court of Victoria, which was originally known as the Court of Petty Sessions. From 1923 the court sat at the Chelsea Picture Theatre, and in 1929 it moved to the new Chelsea Court House, which was used until its closure in 1985. These jurisdictions included criminal, civil, and licensing matters from 1923, adoption cases from 1937 and family law matters from 1976. The Children’s Court of Victoria also heard cases at the Chelsea court from 1923.

So how can we envisage this court house in action? The floor plan drawn by architects of the Public Works Department in the early 1950s shows how the building was used by court officials, lawyers, parties to legal proceedings and the general public. The magistrate had a room at the rear of the building, and presided over cases from the bench. In front of the bench sat the clerk who recorded details and outcomes of cases in the court registers. The clerk of courts occupied the front room and dealt with the public across the counter. Separate rooms were available for barristers and witnesses near the magistrate's room. 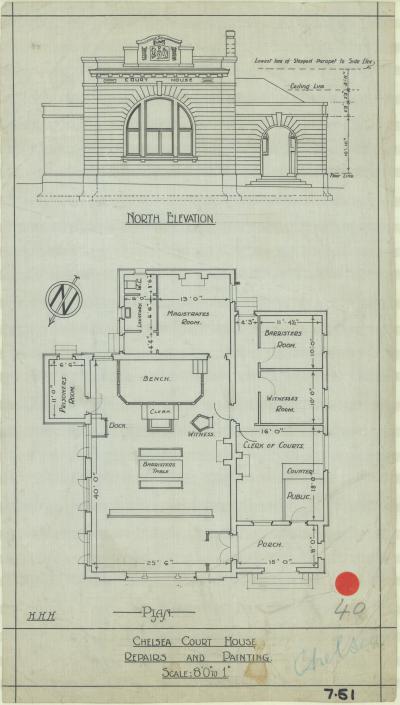 The plan shows the witness stand near the bench, and the barristers table in the centre of the courtroom. On the other side of the courtroom, opposite the witness stand, is the dock where the accused in a criminal matter was seated during their case. If the accused person appeared while on remand (in custody awaiting trial) they would be brought to the dock from the secure prisoner's room at the rear of the building. If they were found guilty and given a custodial sentence, they would be removed to this room until they were transported to a prison.

People were also brought to court directly from the Chelsea police station, which was located next door to the court house from the 1940s, as shown on the Public Works Department plan below. This plan, drawn in 1950, contains the design of a new cell and bicycle shelter for the police station, and public toilets for the court house.

Members of the public could attend open hearings and took their seat under the windows by the courtroom's main entrance, separated from the rest of the room by a timber barrier. Court reporters also sat in this section, taking notes for articles with eye-catching headlines that appeared in local and Melbourne newspapers. Viewed together, these records help us understand the day to day activity that occurred in the building, and the many lives that were changed as a result. 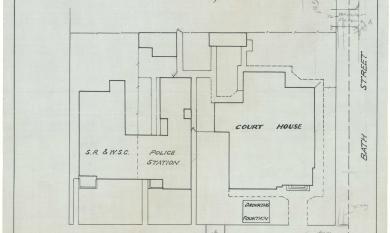 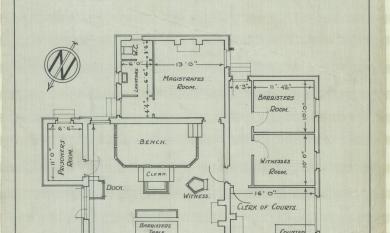 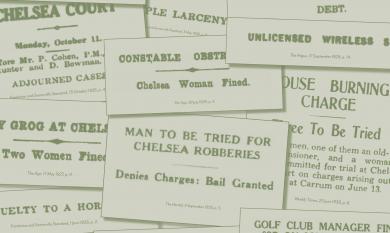