Railway line and Highett Gas Works before Southland was built, 1967.

Recently correspondents in the Mordialloc Chelsea News called for the establishment of a railway station at Bay Road, Cheltenham. Such a facility was seen to be of benefit to members of the community, and particularly the elderly, who did not have access to private transport. To facilitate this outcome one writer urged that a petition be organised. [1]

The construction of a railway station at Bay Road is not a new idea. It was canvassed along with the proposal in 1990 to extend Southland across Nepean Highway to the property sharing a boundary with the Frankston/City railway line. More than a hundred years prior to this the councillors of the Shire of Moorabbin approached the Railway Commissioners with an identical request. Neither proposal got beyond the discussion stage.

At the time of the earlier proposal Moorabbin Shire was primarily rural in character with extensive land sub-divisions occurring at Mentone, Cheltenham, Black Rock and Sandringham. By 1881 the railway line had been completed to Mordialloc and stations had been erected at Glenhuntly, Ormond, Bentleigh, Moorabbin, Highett, Cheltenham, Mentone and Mordialloc. [2]. McKinnon was opened in 1884.

A prime mover behind the development of the Mordialloc line was Thomas Bent, who on various occasions held the positions of Minister of Railways, Member of the Legislative Assembly, Mayor of Brighton, President of the Shire of Moorabbin and Premier of the State.[3] The line had been planned for some time but Bent implemented two important changes. He insisted that the stations in his constituency be of a particular ‘cottage-style’ design not used elsewhere. More significantly he changed the planned route of the line. The intention of the surveyors was that the track would continue south from East Brighton (Bentleigh) on the east side of Point Nepean Road down through Friendship Square in Josiah Holloway’s sub-division ‘Two Acre Village’ and proceed on to Mordialloc. With Bent’s intervention the line moved across Point Nepean Road at Moorabbin and continued on the west side of that road until Mordialloc necessitating expensive financial outlays in the construction of several bridges and cuttings. Why Bent insisted on this change of route is not clear but the Argus reported officers concerned with the construction of the line considered the deviations were "better calculated to accommodate local property holders than to provide the travelling public with direct communication between Melbourne and ‘Frankston’. [4] People from Friendship Square were certainly irate at the change. [5] In Cheltenham the impact of this change was to alter the focal point of the community from the intersection of Point Nepean, Charman and Chesterville roads. Gradually the business and shopping centre changed its location to cluster adjacent to the new railway station.

Thomas Bent, as President of the Shire of Moorabbin led a delegation of councillors and ratepayers to the Commissioner of Railways asking that a station be built at Bay Road. [6] He reported that the application was favourably received. Despite the favourable reception the application was denied. The Commissioners replied they were not prepared to erect a station on the suggested site because "the gradient would be materially affected and would incur an expenditure of £4000 or £5000 exclusive of the price of land." [7]

The response of the Commissioners was not well received. Cr Vail believed a distinct promise was given by Mr Speight that a station would be erected. He pointed out that it was on the basis of this promise that the land had been obtained. As a consequence the Shire Secretary was directed to write again asking that Commissioners honour the promise. [8]

A second delegation waited on the Commissioners, stressing the previous promise, only to be told that the level of expenditure could not be justified. The Commissioners promised, however that an inquiry would be made as to whether, "by selecting a site on the opposite side of the road, the expenditure could be brought within reasonable limits."[9]

The outcome of the inquiry is not recorded but a letter to the Council from the Secretary of the Railways indicated that a commitment to building a station had not been made even if a site were given. The promise was to give the request their ‘fullest consideration’. This was not the recollection of councillors who attended the meeting where the alleged promise was conveyed. Cr McSwain was prepared to take an oath that the very words the Commissioners used were, "If you give the land we will give you the station." He was supported in his recollection by Cr Hearle, the estate agent from Mentone.

The Shire President, Cr Bent, appeared to accept the decision of the Commissioners noting that "they will probably make provision for a flag station. [10] This acquiescence was surprising given the fact that he had intervened in other matters concerning the railways and had had earlier decisions reversed. Moreover he probably stood to gain financially from the building of a rail station on that site. He together with his parliamentary colleague, Benjamin Fink, had purchased one hundred, thirty nine acres three roods and ten perches from James Jamison, land which was in close proximity to the proposed station. [11] With the presence of the station the attractiveness of his land, its potential sales, and its value would have been enhanced.

By August 1889 Bent was no long President, the heat in the land market was dissipating and a major depression was in the offering. The land owned by Bent and Fink was mortgaged to the Commercial Bank of Australia in March 1892 and the ownership transferred to the bank two months later. By this time the council had other more major issues demanding its attention. 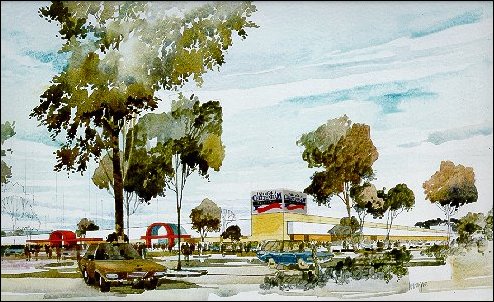 The issue of building a station at Bay Road was again raised in 1990. This was in conjunction with the proposal to expand the Southland Shopping Centre, from land once owned by Tommy Bent, across Nepean Highway to the Cheltenham Market site. A letter from the Public Transport Corporation to the Moorabbin Council responded to a suggestion that the Cheltenham Railway Station be relocated.[12] While acknowledging such a development would provide better access to a major shopping complex the cost they claimed "would be prohibitive and it would be inconvenient for the existing rail commuters." The Corporation saw the solution in the provision of a specialised bus service from the Cheltenham station provided by the developer of the shopping centre or the council. The possibility of relocating the Cheltenham station, the Corporation claimed, was not feasible.

The minutes of a Council working group known as the Cheltenham District Centre Working Group record that the possibility of a new station at Bay Road had been discussed with the Public Transport Users Association. The Working Group consisting of two councillors, Cr Hamilton and Cr Brownlees, officers of the Council, Peter Soding, Catherine Notte, Otto Ash and Peter Anderson from the State Government’s Department of Planning and Housing had some reservations about the proposal but they were not recorded. "Council may have some concerns about a possible additional station" was the note in the minutes [13] An earlier meeting of the Working Group it was reported that "Westfield would be very interested in the possibility of including a new railway station in the development, depending on costs." [14]

The Public Transport Users Association persisted with their proposal predicting that the planned extensions of Southland shopping centre would created chaos unless a new station was created. [15] Others were also concerned about the traffic snarls that would occur when more customers were attracted to the greatly enhanced centre.

Reports were commissioned from consultants by the Moorabbin Council to address a range of issues to avoid problems that emerged in the development of other large regional shopping centres. Avoiding traffic chaos was one. One consultancy group, Loderf & Bayly provided a detailed traffic assessment paying attention to pedestrian and cyclists, truck loading, local street traffic as well as public transport options. [15] No mention made of a building of a new station at Bay Road. Was the issue dead?

The Mayor of Moorabbin, Cr Barry Neve was reported as saying, "It could be argued many of the stations [on the Mordialloc line] are not strategically placed for today’s needs, but there would be a lot of disruption in trying to move them or add to them." [17] The Public Transport Corporation was adamant the proposed station would not be built. "In this case, the expanded Southland /Cheltenham district centre is well served with bus routes and serviced by Cheltenham rail station" [18] 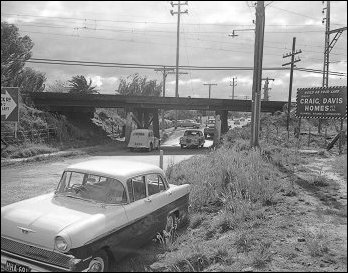