In the sixty years of St. Bede’s College one man stands out as the heart and soul of the school. Brother Finian has spent forty five years in total on the St.Bede’s staff. Apart from a ten-year absence spanning the 1960’s era, his three stints at the college take in nearly all the time of the school’s existence.

Finian came to St. Bede’s in 1943 as a young De La Salle Brother. He had grown up in country NSW where his family had moved around running their tailoring business in different towns. Orange is the place Finian calls his home town.

In the late thirties young Bill Allman joined the De La Salle Order, then very prominent in NSW, and after training and a Sydney teaching appointment, he was sent to Mentone to a very new school battling the austerity occasioned by war.

The twenty-three-year-old Brother threw himself into the St. Bede’s job with enormous energy and youthful joy at the opportunity to work with young men. Initially he taught a whole range of subjects in the middle school classes with a thoroughness and care which thousands of pupils would come to recognise. Later Finian grew to love language teaching and became the school’s French language resource man. He continued to teach other courses, particularly Religious Education and English, at all levels. 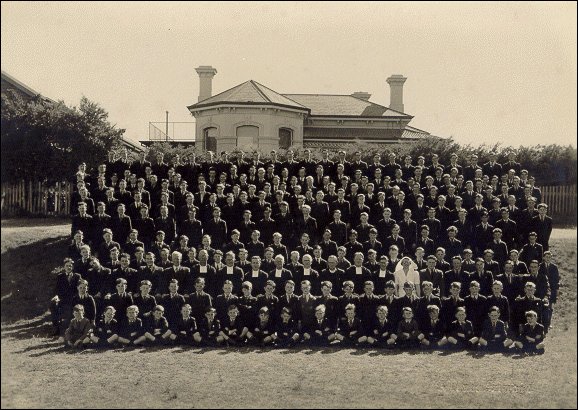 St Bede’s College 1943. Brother Finian is the third brother from left. The house in the background belonged to Matthew Davies in the 1880’s.

Finian grabbed the affection and loyalty of students with his other activities around the place. He coached sporting teams, notably junior ones, and he did it in such a way that boys burst with enthusiasm to get into his sides. He had a way of mixing in with the pupils at football or cricket practice such that he seemed one of the boys. Finian also spent countless after-school hours on manual tasks where he chopped wood, did the garden, mowed the ovals, rode a bike around the district delivering school messages, or prepared the turf wicket for matches on the Front Oval. In all these tasks boys would often be partners in the work and learned more than just physical skills. During those early years St.Bede’s had over 100 boarders and Brother Finian was among those who spent many hours supervising and advising them on a daily basis. As a religious Brother he also had a regime of spiritual duties to practise, beginning at around six each morning, and in these he was a shining example of fidelity.

During the war years St.Bede’s had an Air Training Corps and Brother Finian was the Officer in Charge during 1945. He had to train for this job and this entailed at least one terrifying flight in a rickety trainer plane over Point Cook.

In 1953 Finian was appointed Head Master of St. Bede’s and spent the next six years in the most difficult job of his life. The College roll call went from about 400 to just over 800 in five years. The old classrooms, already outdated, became hopelessly inadequate for the baby boomer explosion in the school population. Class sizes went over fifty and courses were taught in rugged conditions with even the shower block hosting classes for a while. As a new brick building was being planned, funded and erected during those years Finian’s job became onerous in the extreme. New staff had to be found and paid for in a period when teachers were in short supply, office work multiplied, frictions arose in crowded rooms and playgrounds, the mud of building sites deepened, so the patience of a saint would be stretched. St. Bede’s had a person qualified for that status. Teachers saw him slump after each day’s work and go to sleep in his chair. But he shepherded St. Bede’s through the fifties to a time of improving conditions. 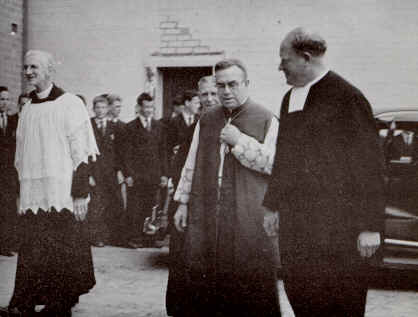 Brother Finian walks with Archbishop Simonds during his visit to St Bede’s.

Brother Finian spent time away from Mentone during the sixties and was Director of Novices at the De La Salle Training College for a period. He came back to St. Bede’s for a one year stay in 1969.

On returning in 1972 Finian began a long period of service as teacher and elder statesman around the College and this still continues. At times he has been Deputy Headmaster and Director of the Brothers’ Community as well as head of the LOTE Faculty. A whole new generation of boys and colleagues has learned to respect the solid service and integrity of this loyal man.

As one Old Collegian from the very early days wrote of Finian ,‘When you looked into those big, clear blue eyes you could never doubt his sincerity’. The qualities of undivided loyalty, devotion to duty, dedication and integrity are not always on offer these days, but Brother Finian Allman has shown them to thousands of St Bede’s people over more than fifty years. And he has done it with perhaps the best quality of all, humility. St. Bede’s is enormously richer for having had this man as its servant.