Laura May Ferguson: "Guiding Light" for the City of Mordialloc Historical Society 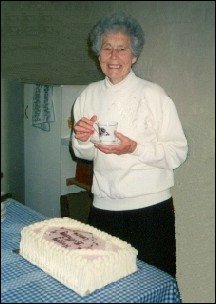 Laura May Crosswell was born to Laurel Bentleigh and George Walter Crosswell in New Norfolk, Tasmania on September 30, 1917. There were five other children in her family. Laura was the fifth generation from the convict, Henry Crosswell, who was transported for life to Van Diemen’s Land in 1812 for stealing a horse. "He said he was only borrowing it," said Laura. "He married a young lady 17 years of age from Norfolk Island in 1820, and eventually after working on properties he managed to save enough money to buy a property of his own. As the years went on he obtained more property and became quite comfortable."

Laura attended a small rural school in Tasmania where she remained until grade 8. As she explained, "My father was one of those people who didn’t believe in girls being educated. My brother went off to High School and I stayed home to help with the family. Eventually I got a little fed up with it … so I booked a passage and came to Melbourne. I was about twenty then." Initially, in Melbourne she lived with an uncle and aunt at Ringwood and renewed a friendship with Charles Ferguson whom she meet at a dance in Hobart.

Charles and Laura were married at St James’s Old Cathedral in 1941 and lived for some time at Williamstown. It was there that her two children, Barry and Beverley, were born. "After the war we decided to look around to see if we could find some land somewhere else to build a home. We came looking round Sandringham but decided it was too expensive, so we came on further down and looked around Mentone and Mordialloc." It was at 5 Royal Parade, Mordialloc that they purchased land and built a home which was completed by the end of 1948. Then commences, for Laura, a time of extensive involvement in church, school and community groups.

The Fergusons became involved in the Sunday School and Church of St Nicholas. Laura was treasurer of the Sunday School Committee and Charles was the secretary of the vestry. Laura became a member of the State School Mothers’ Club for Mordialloc school and helped raise money for buildings and equipment. She learned floral art and commenced judging shows at kindergartens and other places. As the children grew up she became involved in the organisations of which they were members, kindergartens and sporting clubs, helping with afternoon teas and other activities. There also was the Mordialloc Horticultural Society in which both husband and wife became staunch and active members.

It was in October 1963 that Laura was invited by a friend to accompany her to a meeting in Paul Dwyer’s house to consider establishing an historical society in the district. "History is something that I have always loved," said Laura. That was the beginning of a long and loving involvement with the Mordialloc Historical Society and particularly its museum.

In 1972 Laura and Charles increased their involvement with the society. Charles became President and they began lobbying the Council for a premises suitable for storing and displaying an increasing collection of artefacts and photographs. "In the end they decided they would support us and that they would think of providing us with a building for a museum. …and in 1977 in March we had an official opening of the museum. … We had advertised in the local paper, for people to bring along things for the museum and so we would often arrive at the museum to find things, stacks of photo frames, and photographs and various local objects to do with the City of Mordialloc … My work has continued over the whole length of the museum and the historical society." Laura was appointed as historian to the society and as Leo Gamble wrote in the society’s newsletter, "was the guiding light in developing and extending the work of the historical society and building up the resources of the museum." In 1986 she was received Mordialloc’s Citizen of the Year award and ten years later her work was again recognised in the Queen’s Birthday Honours list when she received the Order of Australia Medal for services to the Mordialloc Historical Society since 1963.

Laura Ferguson died on October 30, 1998 after a long and brave battle with cancer. She had continued to live at home and remained active in the society until a few weeks before her death. On November 4, 1998 at the Church of Christ, a Celebration Service, attended by her many friends and family, was conducted by Mr Albie Fitt where her contributions to the local community were acknowledged.