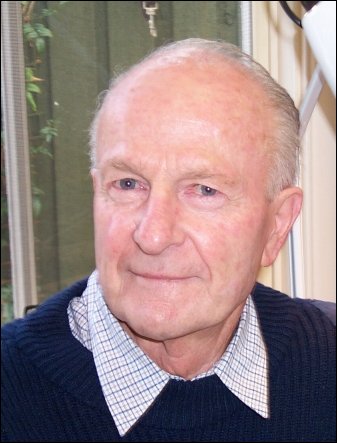 It was a concreter who set a four and a half year old boy on the pathway to architecture. When he was watching some men constructing a cross-over near his home in Bentleigh, Rex Patrick was asked by one of the workmen what he wanted to be when he grew up. Rex said, "What you are." The workman immediately replied, "You don't want to be a concreter. You want to be an architect." Rex admitted that at the time he had no real knowledge of what an architect was, or did, but the idea stuck in his mind.

Rex's father was a tram driver but there were relatives engaged in various activities associated with the building industry. For example there were land surveyors and stone masons. As he grew up his parents were very accommodating to his interest in architecture.

"I got quite interested in making my own sort of city and my parents allowed me to transform our suburban backyard into a city with concrete roads, houses and other buildings. It took up half the backyard. The rest was fenced off for a vegetable garden."

After leaving Bentleigh West Primary School Rex continued at Brighton Technical School until he was fourteen. Then followed his first stint in an architect's office with Purnell and Pierce on the corner of Elizabeth and Collins streets in the city. There he undertook all the menial tasks normally assigned to a beginner, tracing things, delivering drawings to clients and answering the telephone.

"We worked in one room. Arthur Purnell, the boss, and draughtsman Bob Irving were there. The 'boss' had his desk on one side of the room with a telephone on the wall. I sat at a drawing board on the other side. When the telephone rang I would have to walk across the room, lift the phone and say Purnell and Pierce here. Who am I speaking to? I would get the message that the caller wanted to speak to the boss so I would hand the receiver to him. He wouldn't answer the phone himself."

An important part of Rex's training at this time was accompanying the architect on site visits where he would gradually learn the problems associated with the whole business. As he became more proficient the young boy was given more responsible types of work. Rex recalled being sent by Arthur Purnell to the MCG one Saturday morning so that he could write a report on the things for and against a particular building which had been designed by Purnell and Pierce. The report had to be with his employer by Monday morning.

Working hours were long including Saturday morning. The usual finishing time on a Saturday was about 2 o'clock. For this work there was no pay only refunds for travel costs. Working in an architect's office was seen more as a privilege and the common way of entering the profession. There the 'master' imparted his knowledge and professional 'secrets' to the uninitiated. Not only was there no financial remuneration for the aspiring architect's work, he or his parents were expected to pay for the opportunities provided.

After six months at Purnell & Pierce, Arthur Purnell informed Rex's parents that they would have to pay £100 per year for the training their son was receiving. "They couldn't pay that and together with the knowledge I had already gained at that stage I realised my education wasn't advanced enough. So I went back to Brighton Technical School to finish a course there before moving in 1943 to Melbourne Technical College to undertake studies in architecture." There he was awarded an Alison Harvey Scholarship for the best four years' performance which allowed him to continue his studies at night at the University Atelier graduating in 1949. During this period he worked during the day at Yuncken, Freeman Bros., Griffiths and Simpson - Architects and Ronald J Wilson's Architectural Office.

According to Rex, one of the big breaks he had early in his career occurred while working at Yuncken Freeman. There he was working directly with Mr Yuncken Senior who at that time was very ill. "He was designing the Bendigo Benevolent Home. I would do drawings in the office and take them to his home to check out the details. He couldn't come into the office. This was great experience because I was working with a very experienced and successful architect at a very young age on a very significant project. I virtually had to take over all the loose ends that he just couldn't handle and was given a great deal of responsibility that was unusual for a student of my age. This experience in hospital design was to play an important part in my later career when I was involved in designing similar or related facilities."

It was at Yuncken Freeman that Rex met David Chancellor. They decided to work together in submitting designs for various competitions. One was for a swimming pool for the Melbourne Olympics. The design didn't win but it was the beginning of a cooperative working relationship. From this experience the two men decided to set up in partnership.

David Chancellor had just commenced his architectural practice on the first floor of the Austin Building, Bay Street, in Frankston and it was there in 1954 that Rex joined him in creating the firm, Chancellor and Patrick, Architects. Initially their commissions involved a lot of domestic architecture on the peninsula but some major projects were also undertaken. These included the Frankston Hospital and work for the Brotherhood of St Laurence at Carrum Downs. About this time Rex designed and built his first home for his own family at 19 Olympic Avenue, Cheltenham.

Chancellor & Patrick opened an office in Domain Road, South Yarra, later selling it and moving to Albert Park. The office in Frankston was closed but work opportunities continued to grow. From the time when Chancellor & Patrick consisted of just the two architects it grew to a situation where almost 30 people were employed to complete the commissions.

Much of Chancellor & Patrick's work depended on government finance so as the focus of government priorities changed the nature of the commissions undertaken also changed. Initially attention was on hospitals, then universities and later technical schools. "We would suddenly find that hospitals were not being funded so we promptly became experts in university buildings. Then followed residential accommodation at Latrobe University and Monash University including Chisholm College and the Student Union building at Latrobe and Farrer and Deakin Halls at Monash. When the budget for university development was exhausted we moved to technical schools. We were prepared to have a go at anything. In addition to hospitals, residential accommodation and schools there were always a few churches, homes for the aged and industrial buildings," commented Rex.

One of the first commissions in what was to become the City of Kingston was an ES&A Bank in Charman Road, Cheltenham.[1] By that time Chancellor and Patrick had designed a whole series of ES&A banks including those at Frankston and Colac so they had an established record as understanding the architectural needs of the bank. As Rex explained, he designed the Cheltenham bank with a white cement rendered strongroom cantilevering out from a Dromana granite stone wall on the west side of Charman Road, facing east. 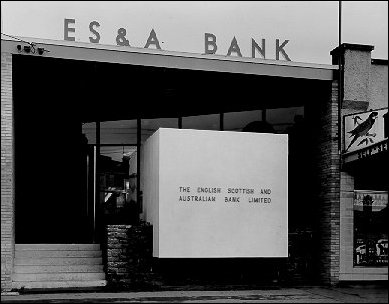 "I got a call from the ES&A bank saying we had a problem with the building. 'The newsagent opposite has complained about the glare reflected from the bank's white strongroom. Could you go and see him and see what you can do to minimise the problem?' I proposed covering the strongroom with green glass mosaic ceramic tiles. From that visit came a commission to modernise the old two storey brick building on the corner of Charman and Railway roads owned by Stephenson and Cutland where they conducted their authorised newsagency. The front of the modernised building was a continuous show window with box-shaped display units built into it. These units were finished in natural timber and were supported by steel columns in the shop window. 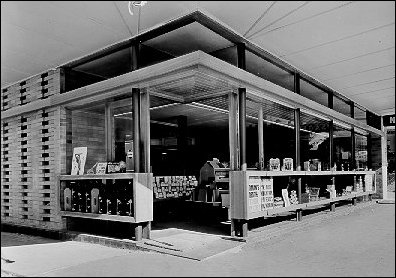 Other work in Charman Road included the redevelopment of Wilson's Chemist shop on the north-east corner of Charman and Station roads. This involved the creation of several new shops running down Station Road with professional suites on the first floor. A commission followed later to design a new dispensary and chemist shop south of the railway line for the United Friendly Society at 276 Charman Road. There was also a dentist surgery next door.

It was also in Cheltenham that Chancellor and Patrick designed two church buildings for the Anglican church. The first in Follett Street was a multi-purpose building used as a church and a hall. The second commission was for a group of buildings on the corner of Nepean Highway and Park Road. Here Rex Patrick designed a complex of buildings including a new vicarage, hall and church. This latter task involved a great deal of discussion with the congregation of St Matthew's to determine the attributes required in their new building. 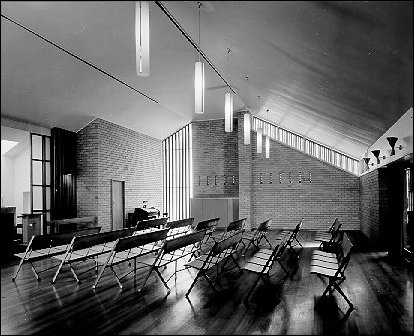 As the architect, Rex had to consider the nature of the site, its triangular shape, its proximity to noisy traffic, the cost of the enterprise and the congregation's wish to break down barriers between the worshippers and the sanctuary. "The old 'gothic' style where the congregation is remote from the rituals near the altar was rejected," commented Rex.

"An architect may develop many alternative ideas of how a commission might be completed so it then becomes a process of elimination. I consider the total concept, try to recognise the important things, then present them to the client as my recommended solution to the brief. Experience tells me if I give the client too many options, particularly where a committee is involved, I won't get a decision. Because of previous experience with similar buildings you have foreseen most of the problems, so you feel you have the answers. It requires more research when you have never designed that particular type of building before." [2]

St Matthew's Church, Cheltenham is constructed from split face concrete blocks and other materials left in their natural state. The main supporting beams over the Church are precast concrete with quartz aggregate exposed by sandblasting. The UFS Dispensary makes use of band sawn Pinus Radiata formwork to give texture to exposed concrete and facebrick walls with deeply ironed mortar joints. "I like to express things in a natural way and create the impression that the structure is going to support itself. I like cantilevers that grow from a substantial base and buildings with horizontal lines, and a sense of repose." In his career Rex Patrick acknowledges the influence of Frank Lloyd Wright and other architects on his work but says his buildings are an expression of each particular set of project requirements such as site, cost and his expertise. 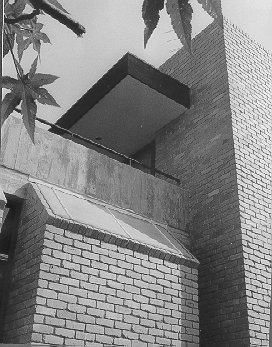 Many of the buildings designed by Chancellor & Patrick continue to serve their original purpose while others, because of changing needs, have been modified. In Cheltenham the ES&A bank no longer exists, the Stephenson & Cutland site has been redeveloped and the Church of St John the Evangelist in Follett Road has become a community centre. St Matthew's church continues to serve the local Anglican community and the United Friendly Society group of buildings remain opposite the Cheltenham Cemetery. "Sometimes when you see a building being demolished, one into which you put a lot of effort, you feel you have lived too long. But if a building is valued it can be modified to suit current requirements and protected." was the comment of Rex Patrick, Architect. 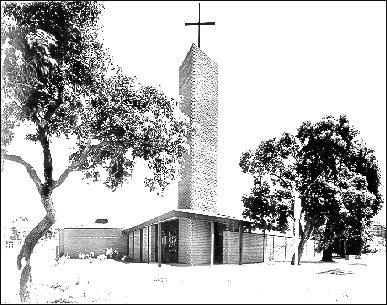