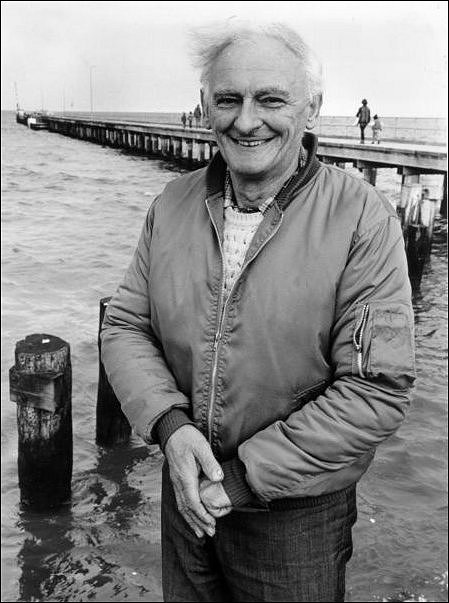 Jack Pompei, boat builder, fisherman and non swimmer is unsure where he was born but the year was 1924. He thinks his elder brother, Salvatore, was born in Sicily and perhaps he was born there too. His own earliest recollections are of being a toddler in Williams Street, Mordialloc. The second child of Salvatore and Edna Pompei, Jack had three brothers, Salvatore, John, and Joseph, and two sister; Maria and Rene.

Jack’s father was a sailor on sailing ships and later steamers. "An orphan, he could neither read nor write," said Jack. "He was married in Sicily. He was torpedoed twice by the Germans during the First World War. He went right around the world and always wanted to go to New York but he never got there. Eventually he decided to settle with mum and the family in Mordialloc. Dad was a professional fisherman. When I was 14, 15 and 16 I would go out on his boat called Peter Pan, although it had a different name before that. Later he had the Victoria. which they started to build at Frankston and I finished at Mordialloc."

Jack has an unquenchable love for boatbuilding, Port Phillip Bay and the Mordialloc Creek. "I went to St Brigid’s school but played the wag a lot. I had no interest in school. I went and worked with dad while still at school and he taught me a lot about boats. I was boat mad. You could say I was born with a boat in my hand. I started to build boats at home and dad helped. Dad sent me down to Herbie Maumell at Frankston to help him in building boats and later I went to school at Footscray Tech where four or five of us were taught about boat building. It got to the stage where I was helping the teacher. It was Alan Richie who taught me about engines. There was a time when I was building boats on Ken Kirby’s farm in Follett Road, Cheltenham where he lent me a shed. It was about six months later when dad came to me and said he had some land for me at Mordialloc. We built a shed there where the factory is today." 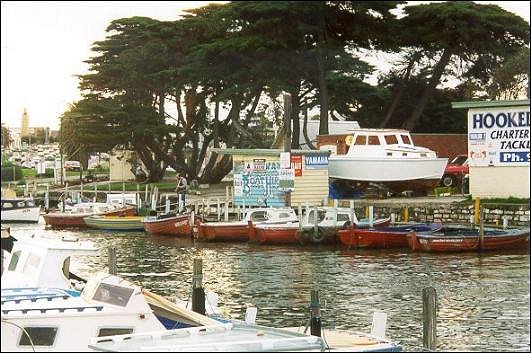 Since his school days, Jack has built and repaired hundreds of boats at his Mordialloc factory on Nepean Highway. There are Pompei boats at King Island, New Guinea, Queensland, Western Port Bay and of course on Port Phillip Bay. He estimated he has built 90 per cent of the clinker-built boats on the bay. (The clinker boat is one where the boards are overlayed like on a weatherboard house.) Even today at 76 years of age Jack keeps working, building and maintaining boats, and yarning with friends and fellow fishermen about their catches. "How did you go?" is a question asked of returning fishermen. Beside boats being repaired, the Mordialloc factory is full of timber and off-cuts that might be used for some small part of a boat to be built in the future. From the wall hang patterns for section of boats and tables overflow with boat plans, evidence of Jack’s draughtsmanship skills. It is these same skills he has used in drawing up proposals for the development and preservation of the Mordialloc Creek. 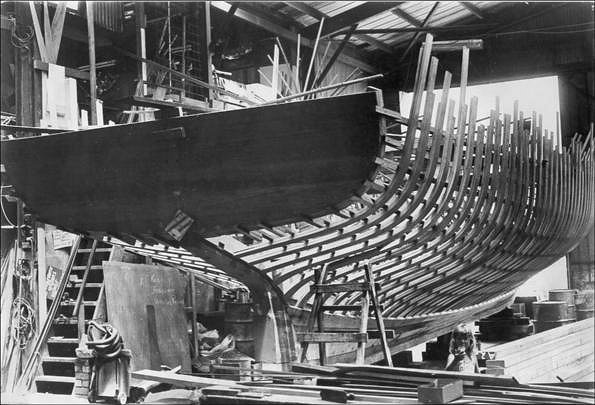 Jack has worked tirelessly over the years to protect the creek. "Take the creek out of Mordialloc and there would be nothing here," is how he expressed it. "A few years back you couldn’t get a mooring for your boat, now there are 80 moorings vacant because the creek is silting up and we have the problem of the reeds. They stop the flow of water and collect rubbish but some people like them." There is also the problem of vandalism. "There was a time when you could leave things in a boat with no worries. Everyone helped one another, there was community spirit amongst the fishermen. Now boats are damaged and graffiti scrawled across other people’s property." "At one time", he said "the Pompeis had 44 boats on the creek for hire, and three people were employed full time but the vandals made short work of them." They now have six boats.

"There was a time on a Saturday when we would have 88,000 people at Mordialloc having picnics and enjoying the beach and creek. We used to sell them hot water during the Depression in the 1930’s. You had to do this to survive. There were six passenger boats that would bring people to the Mordialloc pier. There were twenty fishermen tying up their boats in the creek. People enjoyed the creek as it was full of fish. There was bream, flathead, whiting and snapper. The record for a bream was six and half pounds. Fish would swim up the creek with tears in their eyes. That was how clean the water was. You could take passengers up as far as the Springvale Road Bridge. There were 90 boats moored on the school side of the Railway bridge."

Severe flooding in 1934 brought about a decision to block the winding Mordialloc Creek and in the years that followed silt and pollution built up. Fish disappeared from the creek. The murky stretch of water became so badly fouled that people were warned that swimming there was dangerous. 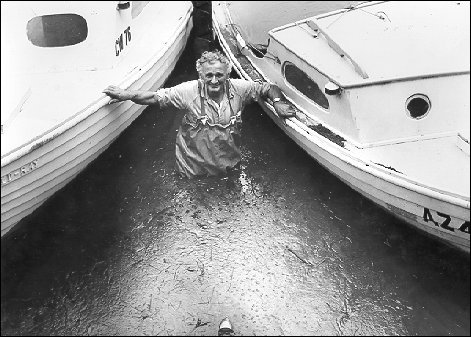 Jack in the mud in Mordialloc Creek.

Various committees investigated the problems of the creek and made recommendations but Jack believes not enough action has occurred. "When Stan Hawkins was Mayor of Mordialloc the water in the creek stopped. It was bone dry. A petition to save the creek, to dredge it, was organised and 8.000 people went through the factory to sign it. There was a meeting with the EPA in Sir Dallas Brookes Hall in the city where it was said $75,000 was needed. We have had meeting after meeting, it goes on forever. If you’re not prepared to spend money on it you might as well barrel it and fill it in."

Jack has himself put in walls on the creek bank where he moors his boats and worked with the Public Works Department to create walls on the opposite bank. Through his efforts the mouth of the creek was changed to a little south of the pier, part of the pier was enclosed to stop water rushing through and thereby help restore the beach, and the creek was widened in some parts. Dredging has been undertaken at various time with the silt being deposited at different sites including the Parkdale Primary School, the Mordialloc and Cheltenham Community Hospital, St Brigid’s, and what was once the Warren Road tip. 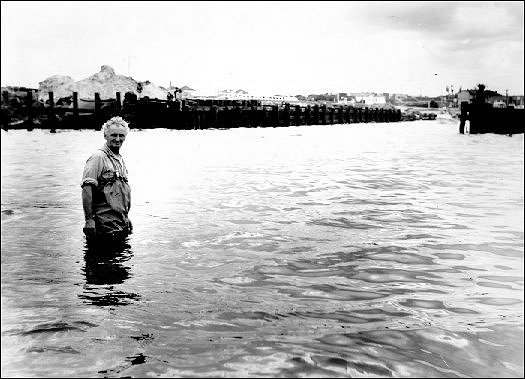 Jack Pompei on the sandbar at the mouth of the Mordialloc Creek.

Jack’s proposals for the creek include extending the mouth of the creek to the end of the pier and to curve it around to the deep water, to prevent it being choked up with sand banks. "Too often people have not been able to get their boats out of the creek because of the sand bars. We have the safest port and the worst entrance, it must be protected in all seas. Bring the passenger boats back to bring tourists into the town. They will spend money and people will be employed. Put in silt traps, replant the red gum trees that produce durable wood and dredge once very three years." To Jack it is common sense to put a drag line through the creek and dredge it to Carrum. "They are building houses at Aspendale Court so they could use a boat to go shopping but the top end is silted up and boats are sitting on mud.". 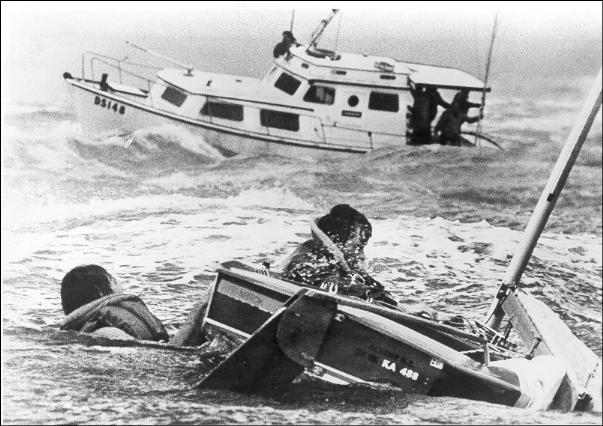 Like his father before him, Jack has rescued many people stranded on the bay and although the water police took over this task in the 1970’s Jack has continued to provide assistance when necessary. Over the years he has rescued more than 600 people. He became involved in rescue work because locals valued his knowledge of the bay and because he was willing to take his boat out day or night, no matter what the weather. He commented, "People just started calling me whenever there was someone overdue or there had been an accident. The bay can be treacherous to those who don’t know it and very unpredictable." In 1987 Jack Pompei was awarded a Medal of the Order of Australia for his services to marine search and rescue in Port Phillip Bay. 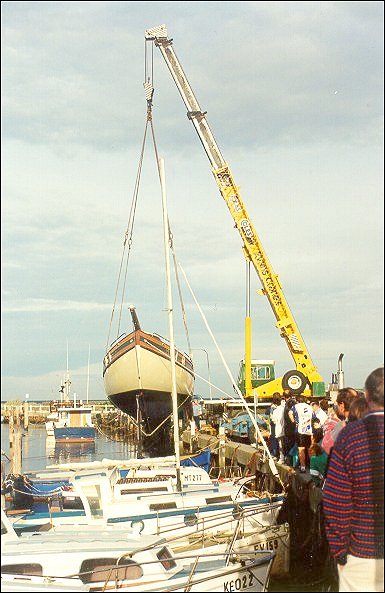 The launch of a Pompei boat.