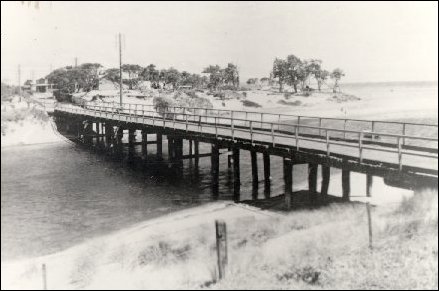 George Whitehead moved with his family on to Lot 102 of the Carrum Carrum Swamp in 1871. The allotment consisted of 300 acres and 14 perches. His neighbour to the north was Charles Marson and to the south James Nixon. When making his application George noted, "On account of the depth of water on the back of the allotment I could not put the pegs on the exact corners".

Prior to moving onto the swamp, George, his wife and seven children were living in Balcombe Road on the Beaumaris Estate, which would now be described as a one acre property on the corner of Balcombe Road and Bourke Street, Mentone. The land with its two roomed house was owned by Joseph P. Augear who had purchased it from Stephen Charman. It was on this site that one girl was born to the Whiteheads and another died. 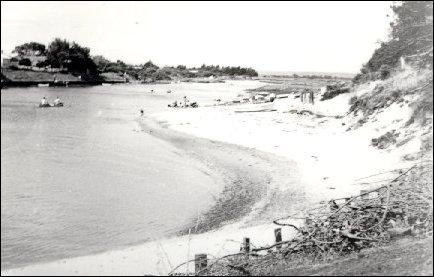 Because of demands for land the government threw open the Carrum Carrum Swamp to selection. This was under the policy of settling "a numerous yeoman class upon the land in response to the agitation to free broad acres from the squatters’ domination". (Hibbin, 1984:66). Under the Land Act of 1869 people were allowed to peg out land to a maximum of 320 acres. The person then "formally applied for the land and fronted a local Lands Board whose task was to determine the applicant’s sincerity and likelihood of success. If approved, the selector rented the allotment for a licensed period of three years at two shillings per acre. At the end of this time a lease was given and, providing that the selector had shown that he had genuinely settled on the land, he could go on paying the rent annually for another seven years when he would receive his Crown Grant, or he could buy this freehold by paying the balance owing from £1 per acre, less the rental payments already made. To prove his ‘bona fides’, or genuine desire to settle, the licensed selector was expected during the probationary three years to enclose the allotment with fencing on all sides, to cultivate one tenth of the area, to live there continuously for two and a half years, and to make improvements valued at a minimum of at least £l per acre." (Hibbin, 1984:67)

The Local Land Board meeting of September 22, 1871 recommended that the application for allotment 102 by George Whitehead, gardener of Mordialloc, be granted. He paid a fee deposit of fifteen pounds one shilling and a fee of one pound to prepare the licence.

In November 1874 George applied for a lease of the land. In making the application George had to declare that he had met all the conditions of the license such as having enclosed the allotment with a good and substantial fence and cultivated at least one acre in every ten. This requirement was crossed out and the note written, "the swamp ground is too soft yet to hold post for fencing." From the time of taking up the selection George had spent one hundred and ninety four pounds on improvements. These included constructing 12 chains of post and three rail fences, 46 chains of post and wire fencing, the clearing and ploughing of twenty six acres, planting fruit trees, garden vegetables, tea tree hedges and sowing cascid seed. In addition a two room cottage 24 x 20 feet and 9 x 3 feet made from wood, stone and brick to the value of forty two pounds was constructed. George added the note to his application, "Though not residing continuously on the land in the beginning I spent most of my time on it fencing. The up or dry land is so poor and unsuitable for cultivation that I deferred working it in the hope the low land would be drained sufficiently to be workable with beneficial results but as yet it is not dry enough to be worked."

A public servant noted on March 10, 1875 on the cover sheet of George’s application that fencing was not completed, no cultivation, 26 acres ploughed, resided for last two years, improvements 106 pounds deficient. A further notation was made by another public servant on June 21, 1876, "Apply again when improvements to full value of 20/- per acre effected - say within 6 months." In January 1877 George made another application. The notation from the Ministry of Lands five days later on the ninth day of the month was "When original offer was made applicant was 106 pounds short and received an extension of time. Now he shows the impts (sic) made since then. Please send him a new form and ask him to enter all his impts." George resubmitted on February 21, 1877 indicating he had made improvements to the property to the value of three hundred and twenty five pounds nine shillings. These improvements included the cottage, fencing, wooden outhouses, drainage, and plantings of fruit trees, tea tree, and manuring. The renewal of the lease was approved on January 24, 1877.

On October 15, 1877, George made application to convert his leasehold into freehold. He gave as the reason for this request as "having got some money from the old country lately I am anxious to pay the balance of my rent while I have the money lest my family spend it on me." The attached papers show that George had previously paid a total of one hundred and sixty five pounds eleven shillings in rent between September 1871 and May 1877. The amount needed to complete the purchase of the land was one hundred thirty five pounds nine shillings together with fees of two pounds two shillings and seven pence. The money was paid and deed executed making the land the property of George Whitehead. It was not long after, on December 2, 1877 that George sold the land to Mark Young a licensed victualler of Frankston for seven hundred and fifty pounds sterling. Mark Young occupied the Pier Hotel at Frankston in 1875 and later served as President of the Dandenong Shire Council. After six years of back breaking work, and the birth of a child and the death of two others, George Whitehead made a ‘profit’ of one hundred and fifty pounds on the transaction.

After the sale of the land George and his family moved to Cheltenham. The Rate Book for the Moorabbin Shire shows that George Whitehead was living in a four roomed house on half an acre on Centre Dandenong Road in 1878 and subsequent years. He was listed as the owner of the property with an annual value of ten pounds. The rates were ten shillings per year and at least in one year, 1878, payment of these fees was not recorded. The Melbourne Directory shows he was still living there in 1896, a short time before his death.

He died on January 30, 1898 of a gouty disease of the heart and kidneys. On the next day he was buried in a common grave in the Church of England section of the Cheltenham Pioneer Cemetery. The Reverend Alfred Caffin, Vicar of St Matthew’s Cheltenham wrote in the parish records that the burial was the fourth he had conducted that year. He also noted that George had been "cared for by the B.L.B.S for a long time." George’s age was recorded as sixty-three but other documentation suggests his age was either seventy-two or three.