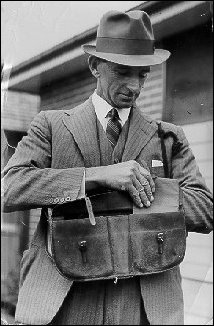 Ernest John Willmott was training horses for the Kennon family and lived on a property they owned at 33 Patty Street Mentone. From there he moved with his family to Braeside in 1940.

Although originally a farmer in Berwick he trained ponies from the time he was fifteen. One of thirteen children he was born in Avenel in 1898. As his father died at a young age Ernest, known as Ernie or EJ, and his elder sisters had a major responsibility for assisting with the care and support of other members of the family.

Ernie leased the property on Lower Dandenong Road from the Melbourne Metropolitan Board of Works (1940-1955). Previously the property had been owned by Dr Syme who bred and trained racehorses there. It was also on this property that the famous race horse, Phar Lap was stabled for a short time while under the supervision of Harry Telford.

At Braeside Ernie trained race horses mainly for well known people.[1] Shirley Morgan, Ernie’s daughter, was not sure of the people who owned the horses her father trained but there was "someone who owned flour mills, someone connected with Swallows and Ariel, Judge Sweeny, Sir Eugene Gorman, the Codys, J.J. Liston, Hodgkinson, Rubin Keam, Don Hutchinson, W R May, and a lot of people in the rag trade." In all there were probably thirty or more horses. Ernie also bred horses on the property which his wife thought were his downfall.[2] "We had quite a lot of mares and foals but none of them made a great deal of money. Probably the best was Prince of Bagdad. Although some paid for themselves in meetings around the bush," recalled Shirley. 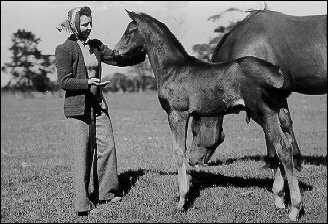 Sir Laddin, a foal bred at Braeside with Mary Heather.

Eleanor, Ernie’s wife in an interview with a reporter from the Herald pointed out that photographs of race finishes and horses trained by her husband lined the walls of the homestead. Only in the lounge did she have ‘ordinary’ pictures. One photograph which held pride of place was of Don Pedro, the hot favourite for the Derby in 1945 and the winner of the 1947 Moonee Valley Cup. ‘Ascot’ in the Sporting Globe predicted that Don Pedro would defeat Hiraji in the 1947 Caulfield Cup but it was not to be.[3] Winning a total of £17,218 prize money over his career of 11 wins, 10 seconds, 8 thirds and 8 unplaced he was put to stud at Braeside Park. The notice of Don Pedro’s availability noted the fee of 100 guineas and the fact that "every care taken, but no responsibility. Free return service if mare not in foal." The first service of Don Pedro, Shirley Morgan recalled, was over a scraggy mare which produced Pedro Pride, a champion steeple chaser. [4]

Eleanor Willmott, had a key role in the business. Not only did she look after her own two children, Shirley and John, she but she also had the responsibility of looking to the welfare of several other people living on the property, as well as entertaining numerous visitors. She cooked the meals and saw that the young boys were suitably clothed to attend race meetings. To assist with the washing and cleaning she had the help of two local ladies, Mrs Watson and Mrs Young. A report in the Herald pointed out that she also washed light rugs for 24 horses and during the war when labour was scarce she helped feed and bed down the thoroughbreds. [5]

Ernie Willmott relaxing with his wife Eleanor and daughter Shirley.

In total there were usually about fourteen people that had to be fed each day. "There were four or more apprentice jockeys and several other employees assisting with the care and training of the horses. There was a foreman and a couple of lads who had become too heavy to be jockeys but were good with horses. They got their keep and they might have got two pounds per week. That was reasonable pay in those days. If their horses were good and won a race they would a good ‘sling’. If a horse won a race in the country they would get twenty pounds but if their horse won a race in the city, particularly if the owners were punters they could get one hundred and fifty pounds. That was a lot of money," said Shirley. [6]

"My mother used to go into the city every Monday to do the race entries for the horses. At first the offices were in Bourke Street. They were small. There was the VRC and the All Sports Club. Clubs like Caulfield, Williamstown, Mentone, Epsom, Geelong all had their little offices. She would have to enter the horses in for both the country and the city meetings. After completing that she would have to pick up things from Hoods that Dad wanted; medicines and horse rubs and stuff. There was also Moulders in Bourke Street, before they moved to Caulfield, where Mum would get the horse rugs, bridles and bits and all sorts of things that Dad wanted.

Mum also drove Dad to the races. He didn’t drive. The horses were taken to the meetings by Hardemans in six horse floats. Sometimes we would have two. Sometimes the second float would come later in the day if you had a couple of horses in later races."

Shirley recalled that she would book the floats on Friday and get the gear ready. "The colours for the horse and jockey’s colours all had to be ready. If you went without your colours you got fined and you had to race in the white colours of the club. The silks were all different colours and made by a firm in Melbourne. It was Mum who looked after them. There were our own colours that were registered and many of the owners had their own colours as well."

Friday was also the day that Ernie and his wife went into the city. "Dad had his hair cut and they would meet up with owners for afternoon tea. He would meet mates and have a drink at the Victorian Bar." But Shirley insisted that Friday was a business day. "At the meeting with owners the prices the horses were going to be at the next day were discussed. After dinner they would often go to one of the owner’s homes where the jockey might be present."

Although EJ often meet with jockeys on Friday night the riding instructions were usually given at the race meeting. Where a horse was strongly fancied the owners together with Ernie might speak to the jockey about how the race should be run. "My father could tell you what time each furlong of a particular race would be run in and where the horses would be placed and where he would want his horses placed. He would say, ‘You sit behind such and such and he’ll be there and don’t you move on that horse till the clock tower’."

"He was a very good judge of horses. I could tell whether a horse could win by the way my father reacted. He didn’t say anything but there was a confidence in his behaviour. He never ever got excited at a race meeting. He never threw his hat in the air or anything like that. You would never know if he had backed a horse for ten thousand pounds or he had not bet anything on it at all. Nevertheless he was a big punter and lost a lot of money, particularly in the later years of his life."

There were numerous visitors to the property on Sundays. "We used to have track work on a Sunday morning. It was quite an event because all the owners would come down to see their horses work on the track. Breakfast on these occasions was usually a late affair but you can image how big it was with twenty or so people. Little Mo, Maureen Connolly, the American tennis player came down with Harry Hopman, who was a friend of Dad’s. Maureen Connolly had a love of horses and did some riding while she was down at Braeside." Preparation for the Sunday visitors would start on Thursday when biscuits, sponge rolls, sponges and other cakes would be baked. As Shirley explained, "It was done on Thursday because we had no time on Sunday. We would have people from early morning through afternoon tea till night time. It was a real social day on Sunday. It was the hardest day of the week." 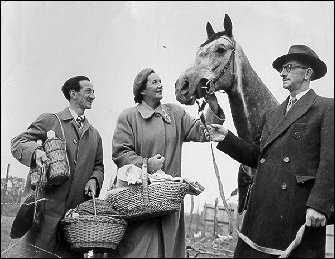 At other times there were other visitors. "We often had market gardeners calling in to collect a load of horse manure and leaving behind cabbages, potatoes and carrots. We had a manure pit. That was a part where the straw and manure from the stables was taken in bags. We called them dung bags. They were split bags that were fringed around the end and you would put one outside the stall where you would go with a pitch fork and pick up the dung and put it on the bag and lift the straw to one side. Anything that was wet would come out on this bag.

Shirley recalled other visitors. "Dad was always pleased to see the ‘Bag Man’." Shirley explained that a lot of the supplies came in hessian bags and chaff bags which were sold to the Bag Man when emptied. "Dad would come in with a roll of notes from the Bag Man. You would have thought the notes were gilded in gold. I think he thought he got something for nothing." The local vicar also called to have a chat. "Dad used to sit down on a bail of hay, have a talk and give him a few pounds." The Rawleigh’s man would call in with his bag of things, liniments for the horses, ointment for the cow’s udder, and Rawleigh’s cough relief, vanilla essence, and junket tables for humans; a whole range of things."

Besides the visitors an important source of information was the daily newspapers. "We had the papers delivered, the Age and the Argus. Dad would read them from front to back. Sometimes we would get the Sun and we always got the Truth. I used to love the gossip in the Truth. The Sporting Globe was a must. After the last race we would wait in town to get the pink paper to read the reports and the commentators’ analysis of the days racing events." 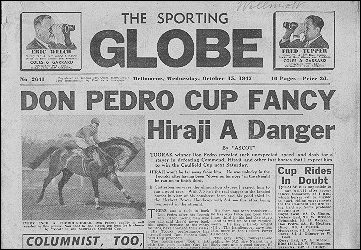 Although EJ wanted to buy the Braeside property this was not to be. The MMBW had other plans. In 1955 the Willmotts moved to a property in Boundary Road, opposite the Epsom racecourse in Mordialloc, because the MMBW wanted to take some of the training track at Braeside to extend the sewerage works. But as Shirley explained, it was not the same at Epsom. "Dad wasn’t the same person after he left Braeside. He wasn’t a man who mixed well. He would lift his hat to people to pass the time of day but he would never talk to anybody at the races. He wasn’t popular with other trainers. He didn’t go to meetings with other trainers although there were a couple of trainers he admired. He would take his glasses to the front gate and watch the horses work. He never set foot on the Epsom track. My brother John, would take the horses across to the course where he would carry out Dad’s instruction."

After a protracted illness Ernest died from cancer in 1972 at 74 years of age.. "For years he hadn’t been able to eat anything fatty. If he did he finished up in bed," commented his daughter. 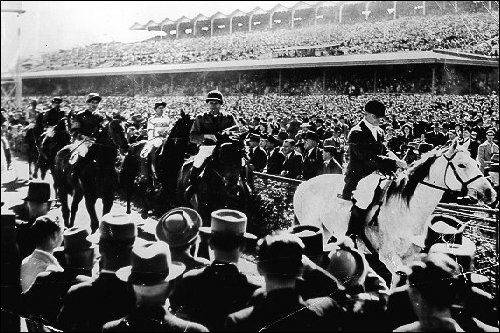