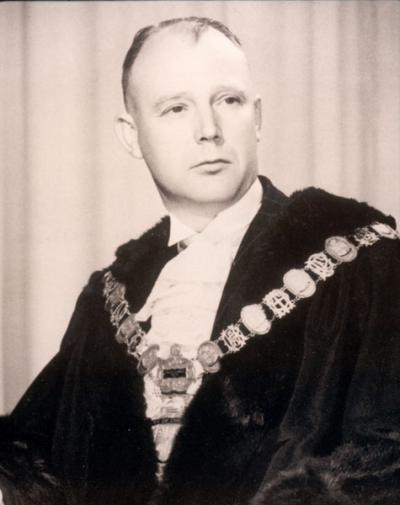 I was born in 1909 to Arthur and Grace Kyberd at Hackney Wick, England. There’s an old English saying that goes like this…

‘If the wind is in the right quarter, you can hear the sound of the bow bells you’re a real Londoner’.

We moved to Tottenham when I was small and I was educated at Tottenham Grammar School. My first job was as an office boy in an accountants firm, at the age of sixteen.

I emigrated to Australia, travelling by ship and docking in Sydney, just after my seventeenth birthday. I arrived under the ‘Big Brothers Scheme’, where someone was to be responsible for you. That never eventuated. I was sent to a training farm at Arawata in Inverell, for three months, where I learnt to milk cows, ride horses and complete other farm tasks. My first job was on a sheep station near Moree, the capital of sheep country. The station owner sold the property and I found work on an adjoining farm, but the owner was too harsh for my liking, so when a drover happened along, offering me work, I joined him as a rider for three pounds ten shillings a week. We drove 8,000 sheep from the Queensland border to Narrabri. We slept under the stars, using our saddles for pillows. In the plains at Moree there was no dead wood to start the camp fire so we would wave to the express train passing through, and they’d throw lumps of coal to us. During the drought the station owners would lock their water tanks, so we’d boil up the bore water for our cups of tea. We sank a bore for the sheep and the first water that came up was boiling hot and so full of sulphur; it was white. Yet the sheep thrived on it. Arriving in Narrabri I landed a job shearing sheep, that was an experience!

I ventured back to Sydney in 1928-29, the start of the Big Depression, where jobless men littered the streets. I resided at the Castlereagh Hotel, paying the princely sum of seven shillings and six pence for dinner, bed and breakfast. Unsuccessful in securing work I came to Melbourne, but no luck there so I travelled to Bendigo where I found work at a cannery. I roamed from one job to another until 1935 when I returned to Melbourne securing a job at the Athenaeum Club as a steward.

I married Margaret in 1936 and we rented a furnished flat in Middle Park for twenty seven shillings and six pence. We pooled out resources and paid twenty five pounds to the State Savings Bank as a deposit on a house in Edithvale and paid fifteen shillings and three pence weekly.

When World War Two broke out I joined the Naval Reserve. Firstly we went to Western Australia and I served on a gun cruiser for about twelve months. Eight of us left for action in the war on a corvette travelling at 17 knots. It took three months to reach our destination. Our first job was as part of a convoy sailing from Alexander to Malta. Once the Germans were driven out of Africa the convoy was finished. We were in Tripoli and after loading up with arms we set off only to sail about a mile out before dropping anchor. It was announced we were to invade the island of Sicily. The American power had to be seen to be believed. From when we left Tripoli all the way to Sicily we had air cover. Everything was timed perfectly, we had a full moon for the invasion, the Sicilians never stood a chance. Next we invaded Italy. We then went to East Africa pulling in at ports where we were hailed as heroes. On our return to Australia we had our ‘pay off’ ceremony. I took Foreign Service Leave, and then was drafted to Flinders where I was cooking for 7,000 people compared to 70-80 on the ship. I was then sent up to ‘close Darwin’ and finally to Port Arthur, Storm Bay on a mine sweeper to get rid of the mines.

In 1946 I returned to my wife and two sons. Margaret had literally brought up the boys alone. I found coming back to ‘Civvy Street’ was extremely hard. I found things like rationing that I’d never experienced before. I took up my old job at the Athenaeum Club, where I met an English engineer who offered me work at the Herald newspaper. I accepted his offer where I was to remain for nearly thirty years. I worked my way up from commissionaire to building superintendent. I used public transport to get to work; the express train from Edithvale took thirty seven minutes. It cost four shillings and six pence for a weekly ‘workers ticket’. 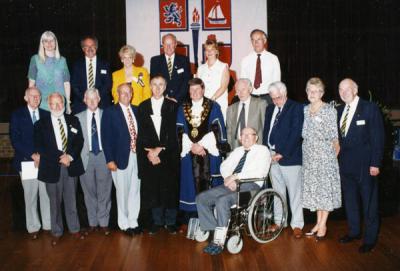 During this time I showed an interest in politics, stood for Council and became Mayor of Chelsea in 1952 and again in 1954. I was responsible for bringing water to the City. Old John Cain, who was Premier at the time, helped to make this happen. Driving home from a dinner, held by the ACTU for four Russian union people, John and I started discussing the ‘pros and cons’ of being mayor and I mentioned that the Tarago System was outdated (i.e. one hot day and the City was on water restrictions) and that the Labor Party wanted sewerage introduced, which was impossible with the Tarago System. John Cain mentioned that Mr East (the Secretary Chairman of the Water Board) was going to England to see how they ‘rate the rivers’. John introduced us and nine months later began the arduous task of convincing the people of Chelsea that septic tanks were no longer appropriate, and thereby brought water, including a few ‘enemies’ to the City of Chelsea.

Upon my retirement from the Herald, Margaret and I went to England for six months to visit my family who were all still alive. A wonderful memory I hold dear.

I now reside at Riverside Nursing Home, where I came several years after Margaret was herself admitted with Alzheimer’s. Soon after her admittance, I gave up driving, and finding it very lonely on my own, became an alcoholic, hence my decision to move in here. I have Dupuytren Contractures in my hands, but am still fairly ambulant with the aid of a walking frame. I now have the time to do the things I enjoy, such as reading. As you can image with my involvement in Council and six years maintenance to catch up on with my return from the navy, didn’t leave much spare time. In my younger days I enjoyed a social game of cricket and was a serving member of the local RSL. I am content with my life at this time.

Used with permission of the Chelsea Historical Society