Despite coming from different parts of the United Kingdom and Ireland, it doesn’t take long before early arrivals in the district of Moorabbin become linked through marriage. The Stookes family tree includes links to the Brownfields, the Allnuts, the Thurling, the Smiths, the Robinsons, the Mills, the Reynolds, and the Tilleys.

The Stookes of Heatherton came from Devon where their family can be traced back to the sixteen century and the time of Oliver Cromwell. One Stooke, William the vicar of Ilsington, was defrocked for non-conformity during the protectorate of Cromwell. His son, Francis, was the vicar of Bovey-Tracey from 1689 to 1704. Both men held Master of Arts degrees from Oxford University. It was later in the 19th Century that several members of the family left Devon, where their family had farmed for over 300 years, to journey to Australia, arriving in Melbourne in 1841 and later.

The Reynolds, in their recording of family history, pondered why their forebears, the Stookes, would want to leave a well-entrenched situation in England for a land at the other end of the world and about which they probably knew little. They suggest it may relate to the changing political, economic and religious condition in England at the time.1 Families were large, farms small, and rights to graze or work land previous considered common property was withdrawn by parliament. The future in Devon looked bleak for young people whereas cheap land available at Port Phillip Bay suggested the possibility of a bright future.

On arrival in Port Phillip Bay as unassisted passengers, several of the Stookes were quick to take up the butchering trade. The brothers Edwin and Henry were butchers in Melbourne. Edwin, in late 1840s, had a shipping butcher’s business at the corner of King and Flinders Street while in 1855 Henry had a butcher’s shop at the corner of Swanston and Little Bourke streets. Both were born in Kingskerswell Devon. Richard Stooke emigrated to Australia on the Francis Henty leaving London on 10 June 1852. He was a butcher in Bay Street Sandridge (later Port Melbourne) in 1856-57, and six years later was in business in New Street Brighton. He died on the August 9, 1865, from typhoid fever. 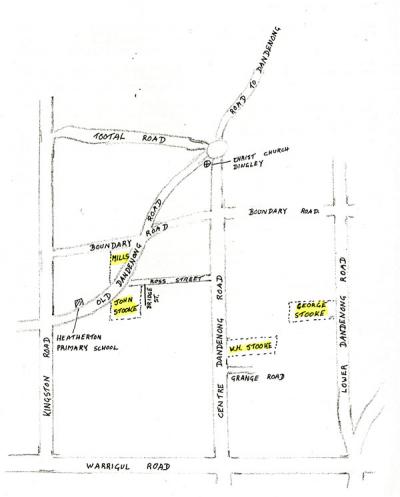 Sketch map showing location of the farms of John, Harry, and George Stooke in Heatherton, 1973.

John Stooke, born in Devonshire England in 1823, sailed for Australia on the Africa on October 9 1856, arriving in Melbourne in January the following year. Although he was listed as a glazier in the ship’s records, later in 1865 he was noted as being a butcher in Male Street Brighton. In the following year he acquired forty acres of land on the corner of Ross Street and Old Dandenong Road, Heatherton, which he farmed until his death in 1897. He was buried in the Pioneer Cemetery in Cheltenham. This property now forms part of the Capital Golf Course.

John Stooke married Emily Mary Robinson at Christ Church South Yarra on 7 August 1860. The Marriage Certificate noted that John was a thirty two year old bachelor and a butcher at Brighton while Emily, from Glen Iris near Gardiners Creek, was twenty two, born in Shropshire, and a spinster. Together they had ten children, three of whom were born in Brighton.2 All children are buried in the Cheltenham Pioneer Cemetery. After John’s death, his wife Emily and some of the family moved to a house in Old Dandenong Road, next door to the Heatherton School established as the Kingston Common School in 1867. It was there that Emily died in 1908. 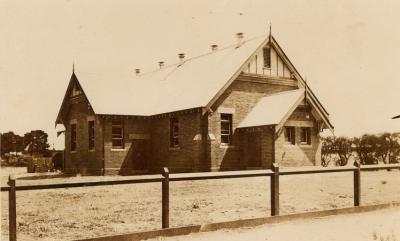 The two sons of John and Emily Stooke, William Henry and George, both worked on their father’s property in Old Dandenong Road, Heatherton. William, known as Harry, married Ella Matilda Allnutt in 1922 at the Methodist Church in Charman Road Cheltenham. They took up residence in a home he had built in 1915 on his property in Centre Dandenong Road which later became part of the development of the Moorabbin Airport. (Opposite the RSL) Harry worked the property until the end of 1941 when it was sold. After the sale the family moved to 1317 Point Nepean Road Cheltenham. In 1943 an epidemic of typhoid fever struck residents of Cheltenham and district and all of Harry’s family, except himself, contracted the disease.3 His daughter, Norma, died at the Fairfield Infectious Diseases Hospital 7 June 1943. Two months later Harry died in a private hospital at Elsternwick aged 76 and was buried in the Cheltenham Pioneers’ Cemetery after a service was held at his home by the Vicar of Christ Church Dingley, Rev C Peterson. The coffin was carried to the grave by four nephews; J and F Stooke, G Brownfield, and R Mills.4

Harry was an active contributor to community life. He was a life-time associate of Christ Church, Anglican Church in Dingley where for over 40 years he was a trustee of Mary Attenborough’s bequest to the church, a church warden, and a treasurer. In the nave of the church there is a pair of stained glass windows dedicated to the Glory of God and in loving memory of William Henry Stooke, Samuel and John Kingston. He joined the Moorabbin Council in 1925 and served until 1937. Harry was one of the original members of the Heatherton Carnival Committee and for several years was president. For a time he was also president of the Cheltenham Bowling Club where he had skippered teams for several seasons.5

George, like his brother Harry, was born in Heatherton. He married Ethel Tilley when 30 years old at St Matthew’s Church of England in Cheltenham and continued to live with his parents for a time before moving to Pakenham, but subsequently returned to Heatherton to work on the family property. In 1928, George bought land in Lower Dandenong Road which he farmed with three of his sons. He died in 1941 after suffering from rheumatism for many years. The land which was previously his property, was compulsorily acquired in 1946 to form part of the Moorabbin Airport Development. The Stooke brothers continued their vegetable growing on the property in Old Dandenong Road, Heatherton, until 1973 when the land was sold for sand extraction. 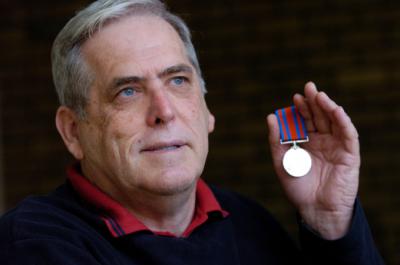 One of George’s sons, Brian, then joined the Victorian Police Force. Sgt Brian Richard Stooke, with colleague Sen Constable Peter Steele, were instructed in 1985 to patrol a local factory area where break-ins had been occurring. In the course of this task they stopped a yellow Cortina on the corner of Centre Dandenong Road and Cardinia Court. Cheltenham. Sgt Stooke was seriously injured on his first encounter with the driver when he was shot with one of four bullets severing his spine. Senior Constable Steele, although wounded in the shoulder, was able to get a radio message through to Police Headquarters in Russell Street to start a major hunt for the perpetrator.6

Two of Sgt Stookes’ colleagues at the Cheltenham Police Station initiated an appeal for Brian who was 40 years of age, married with three teenage children and unable to take up his physically active role in the police force.7 The community responded raising more than $200,000 . A Queensland company donated an automatic bed, Mentone Retell Ford gave a Ford to be raffled, and the Moorabbin-Cheltenham RSL became a major sponsor of the appeal. From the Moorabbin Council he received a commendation for his bravery from the Mayor of Moorabbin, Cr Frank Le Page.8 As a paraplegic he remained a member for several years of the Cheltenham Station supporting the work of others. 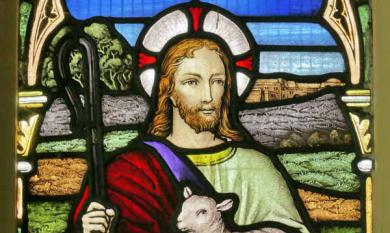 This story of the Stookes draws very heavily on the research of David and Ira (nee Stooke) Reynolds and I acknowledge the assistance of Lois Reynolds and Brian Stooke in providing access to documents and photographs.